Once again Mary Panza called us to order in the back room of McGeary’s for featured poet Paul Pines & a full card of open mic readers -- starting with Sylvia Barnard with a couple poems from her recent trip with her daughter & son-in-law to the U.K., beginning with “Liverpool” then on to “The Great Bed of Ware” (where many people would sleep at once). 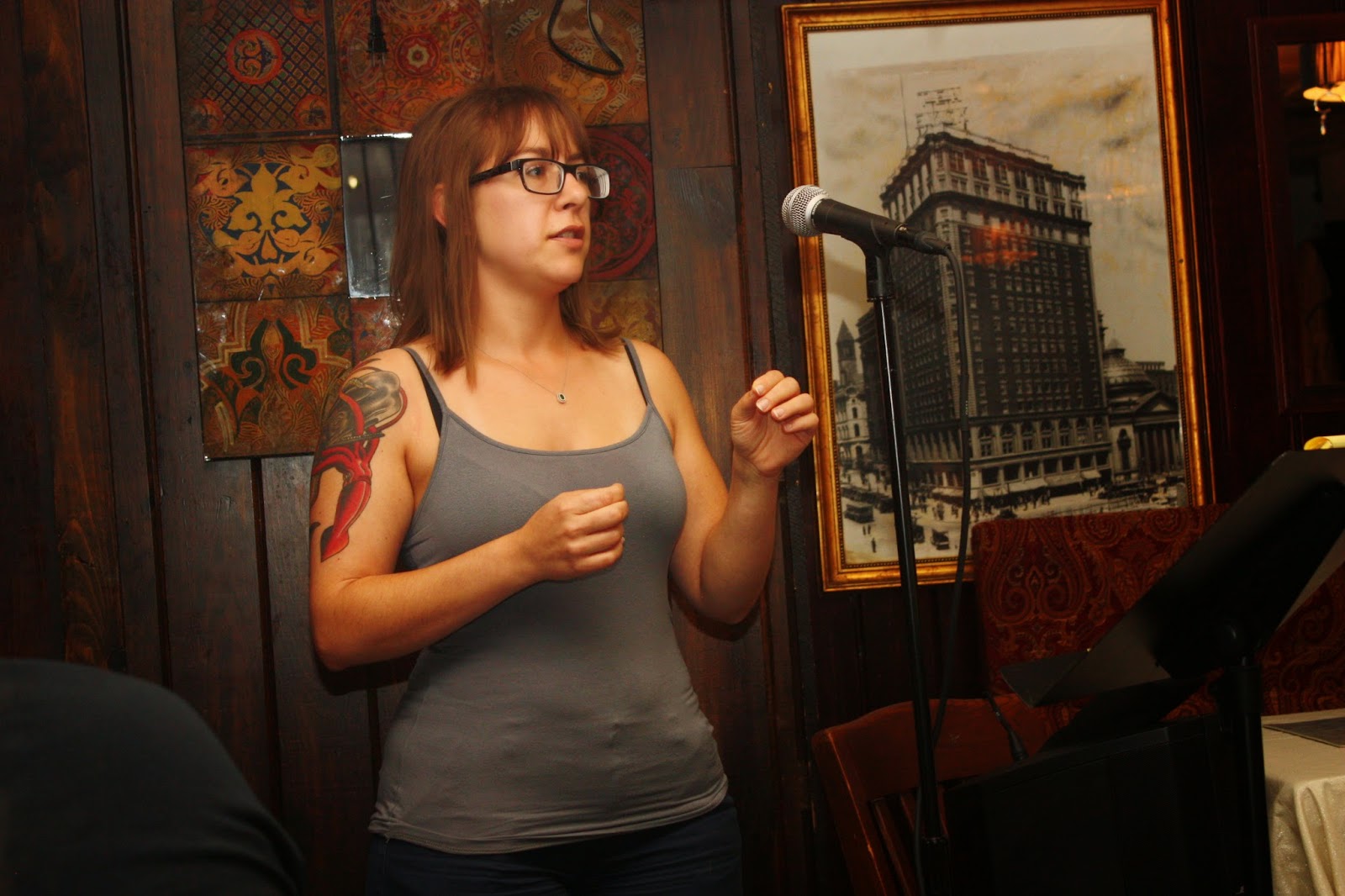 Elizabeth Ryan made the trip over from Pittsfield to check out the poetry scene here, did a poem from memory, then one about the tattoo on her right arm that shows a squid fighting a whale. Melissa Cairns also came from Pittsfield, with a sexy reading of a soft poem on fear v. love “Leaning Together,” then “12 Things I Wanted to Say to My Father.” I followed with a tribute to my friend Ed Bloch who had died yesterday, my poem “for Hugh Thompson Jr.,” then Ed’s poem “I Saw a Jap” from his memoir Courage, Coward, Courage!! Steps Along the Way.  Ed Bloch was World War II Marine veteran active with Veterans For Peace, the Interfaith Alliance & other social justice groups; he once read in the open mic at my Third Thursday Poetry Night on July 15, 2010. 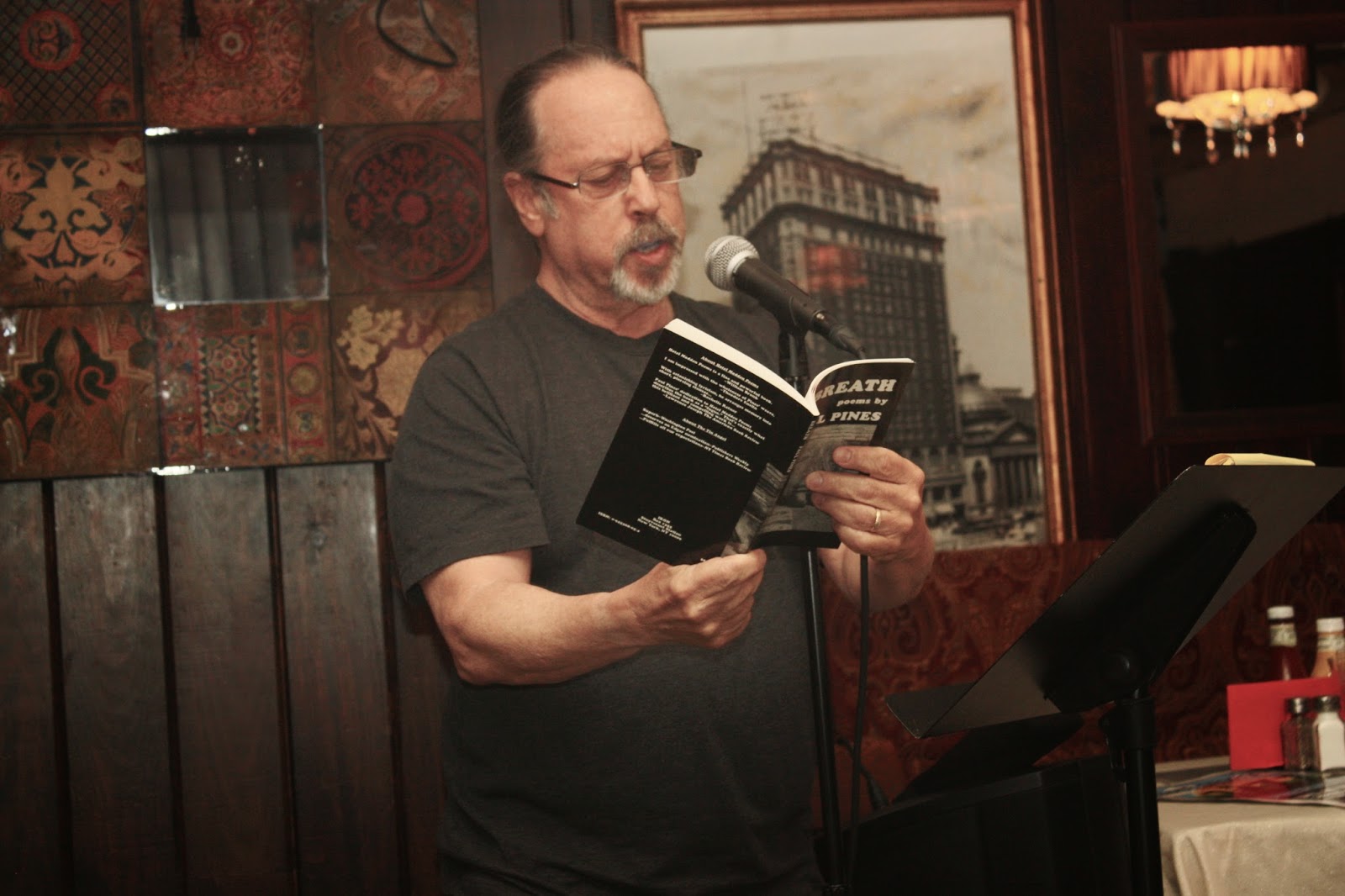 Paul Pines once owned a bar, The Tin Palace, in NYC’s East Village that was my favorite neighborhood hang-out in the mid-1970s, I lived 2 blocks away. Since then he has been writing & publishing his poems in the North Country & organizes the annual Lark George Jazz Festival. He read a selection of poems from his many poetry collections, beginning with “Homo-Logus” from Breath (Ikon, 1996), then from New Orleans Variations & Paris Ouroboros (Dos Madres Press, 2013) a couple poems about paintings “Whistler’s Blue” & “Tryptich” (at the Musee D’Orsay). “Hoops” (from the 2007 Ikon book Taxidancing) references the great Oglala Sioux shaman Black Elk. A poem from Last Call at the Tin Palace (Marsh Hawk Press, 2009) was addressed to a poet & begins “You want to be Orpheus…” He ended quietly with 2 poems from Divine Madness (Marsh Hawk Press, 2012), one about Leonard Bernstein conducting Beethoven’s 7th Symphony at the end of his life, the last filled with the sound of woodpecker’s in the wood’s changing light. It was a wonderful mix of the rich & varied meditations that make up the poetry of Paul Pines. 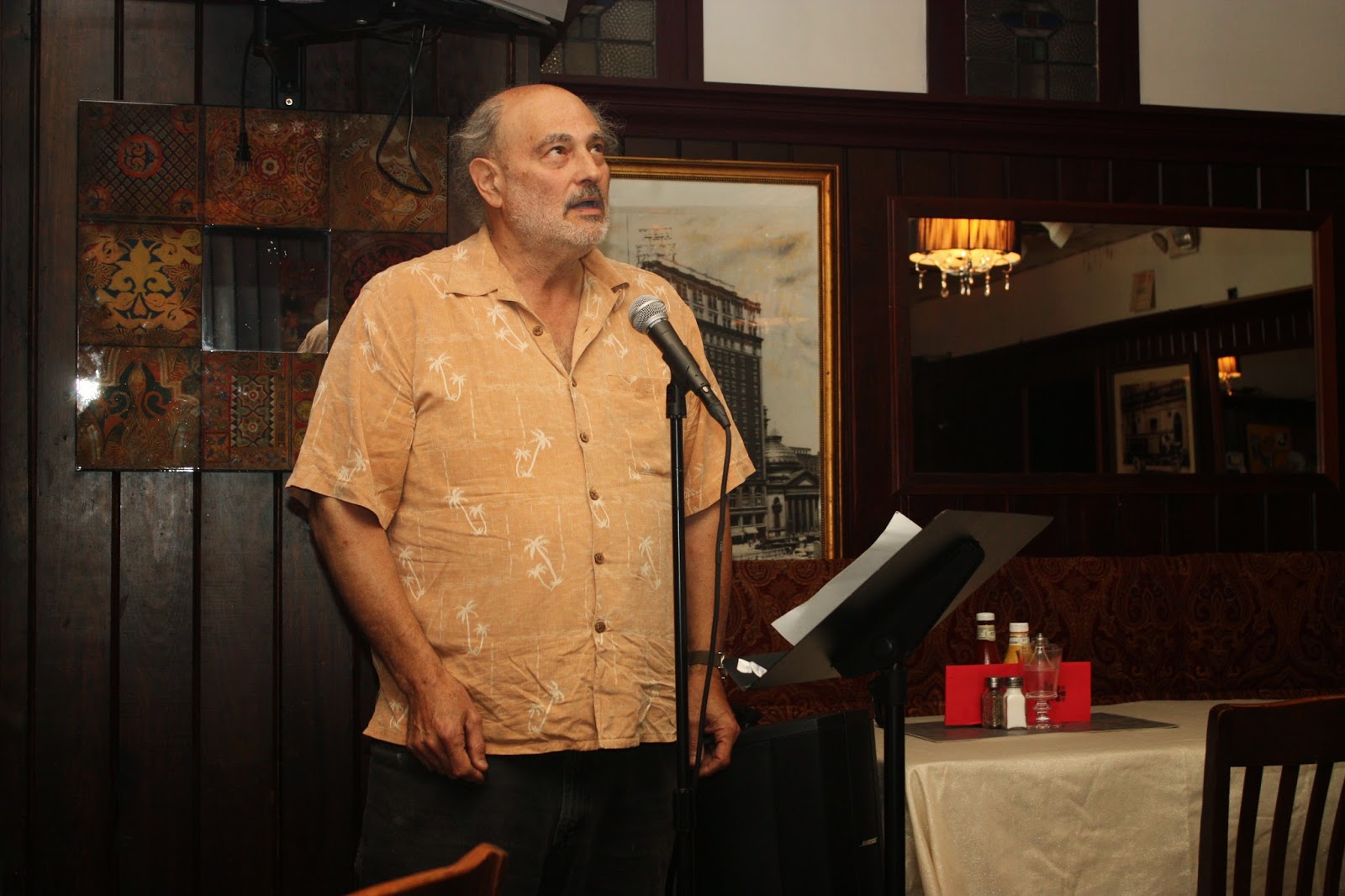 The remaining open mic poets were as rich & varied, continuing with the new voice of “Nick the Knife” who read about a stop at Tortola in the British Virgin Islands, “Sunset at Brewer’s Bay.” Brian Dorn read a couple of love poems he had never done before, “Sublimely Connected” & “Profusely Attracted.” Joe Krausman’s 2 poems were the yin & yang of "stuff": “Mine” (having too much) & “Coming of Age” (having nothin’). Sally Rhoades ended the night with “The Sky is My Witness” about being a poet, & then a birthday poem to an old friend.

Poets Speak Loud! — but you can read quiet poems too — takes place on the last Monday of the month at McGeary’s on Clinton Square in Albany, NY, 7:30, or thereabouts -- a featured poet & an open mic. Good food, drinks & service.
Posted by DWx at 10:24 PM

I really liked your post about
Poets Speak Loud!, August 25