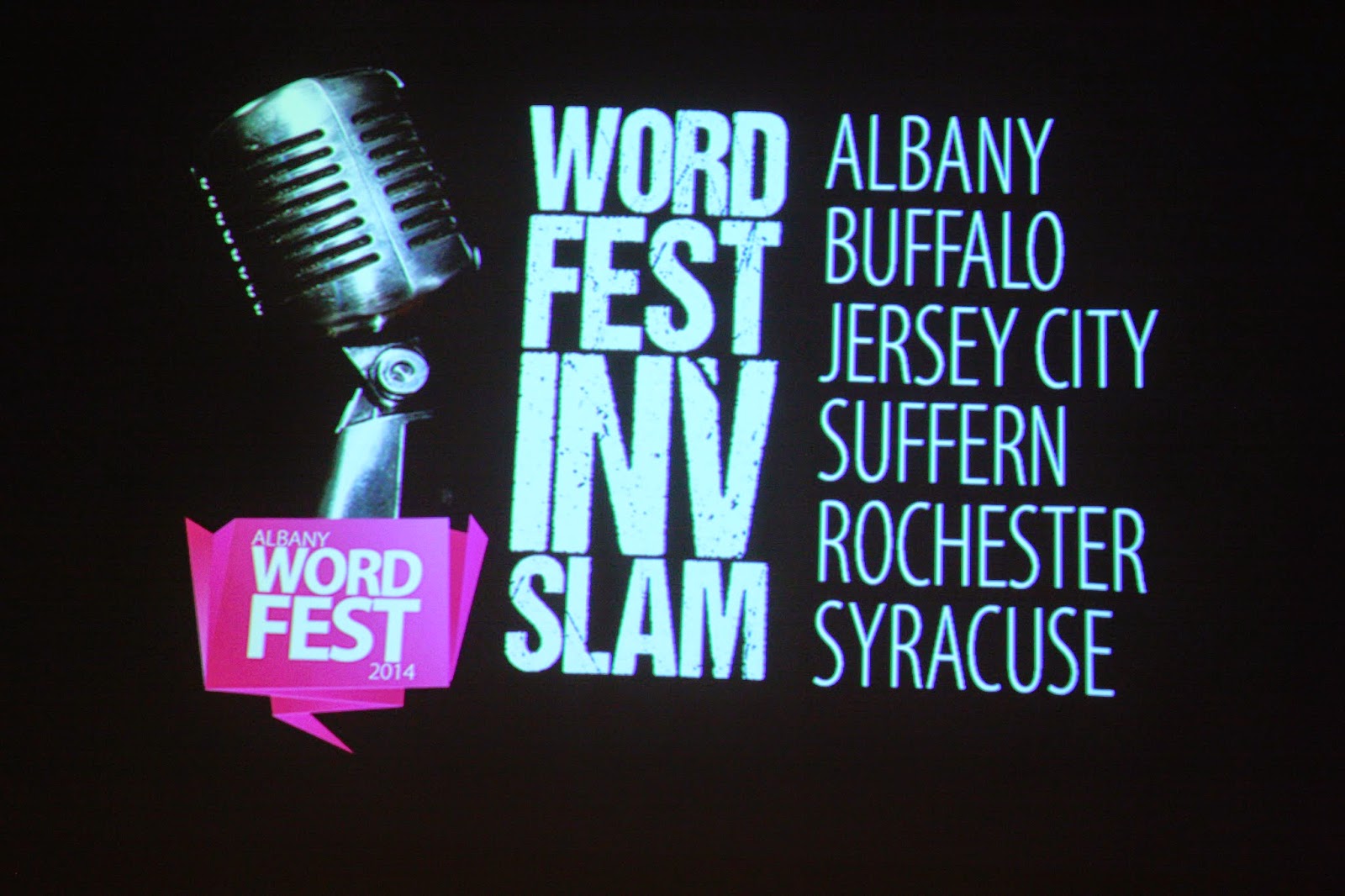 The WordFest Invitational Slam was the culminating, climactic event of WordFest 2014, with a full card of 6 competing Slam teams from Albany, Buffalo, Jersey City, Suffern, Rochester, & Syracuse, at The Linda on Central Ave. in Albany. Albany’s Nitty Gritty Slam is into it’s 3rd year & has established itself as a presence in the world of Slam.

But first there was an impressive display of performance by young poets who are students at the University at Albany. Shareece Charles performed a break-up rant “Double Digits.” Sheila followed with “Love’s a Drug” (oh, yes!). Chole’s piece, “Chosen,” was on women’s images. Steve Valentine performed an intense Slam piece “Preacher Man.” All of these performers would’ve gotten respectable scores if they had been performing in the Slam.

The 5 judges were selected from the audience & moved to the front row seats, then the “sacrificial poet”/calibrator Anderson set us up with “Nothing Like the First Time.” Then on to 4 equal rounds (i.e., no eliminations), unlike individual Slams.

After the 1st round, which were all individual performances, a few things were clear — first of all knowing who the individual performers were was going to be problematic, with the teams shouting out the names amidst the applause, 2nd: it was readily apparent that this was a night of attitude, spit & shout (it was Slam, after all), 3rd: we were in a Revival Tent, filled with preachers & motivational speakers, not a lot of poets. Also, it was impossible to know where the night was going, as far as scores. Since there was no elimination the teams kept appearing in different orders & unless one kept track of the scores (“not my job, man”) one did not know who was in what place at which round. You had to pay attention, which was good.

But there was a lot of energy & competitive scores, for a change, ranging from 7s up to the 9s, with only a few 10s the whole night.

In the 1st round “Mike the Poet” from Team Syracuse performed a piece for his daughter. Joseph from Team Jersey City saw America as a strip-mall. The member from the Buffalo team played on multiple choices. Brian from Team Suffern did a quieter poem about a student in a physics class. The Rochester Team member’s piece was an emotional story of the grandmother voting. Mojavi represented Team Albany (“Nitty Gritty”) with one of my favorites, a poem about the people & issues on his block.

In the 2nd round the Buffalo Team did the first group piece, a neat play on various meanings of “Bills.” The Syracuse Team member described why he prefers Batman to Spider Man. Albany Team member Poetyc Visionz did a piece on love. Kayla from Team Suffern spoke of love/sex/molestation as if writing in a word-processing program. Rochester team member gave an angry performance wondering “who are in” as she walked the streets alone. Jonathan Salazar from the Jersey City team scored the night’s 1st 10 with a piece on a runaway father.

Algorhythm from Team Albany began the 3rd round with a confused piece performed at break-neck speed. Members from the Rochester Team (2 women) did an angry breakup group piece. Suffern Team member Kayla performed an emotional piece about her relationship with her sister. A Buffalo team member recited a numbered autobiographical list poem. Christopher representing the Jersey City team spoke of memories of his mother dying of cancer. The Syracuse Team member read why “I hate you.”

In the final round, Thomas (?) from the Jersey City team described going from cocaine to an MFA. The Rochester Team did a group piece on hip-hop & music. The Suffern Team member did a social commentary poem contrasting the talk about sex by her father to her brother with her mother’s talk with her. Kevin Peterson from the Albany Team performed his well-know alternate-side-of-the-street-parking poem, with a different ending. The Syracuse Team group piece was a love poem, with some gentle humor for a change. The Buffalo Team member did breakup piece about his daughter dancing.

So when the final round was tallied, it was Team Buffalo (108.4) in 1st place, followed by Rochester (107.3), Jersey City (105.4), Albany (Nitty Gritty) (104.6), Suffern (103.9), & Syracuse (103.1). Another night of lots of words, appropriate for the final night of Albany WordFest 2014. AlbanyPoets.com is to be commended for all the work it took to bring these 6 Slam teams together tonight, & for the other 5 nights of poetry & spoken word performance that Albany experienced this week. Not to mention to the poetry open mics, Slams & printed work (Up The River) that they do throughout the year. Like I like to say, “In Albany, Every Day is Poetry Month.”
Posted by DWx at 10:56 AM