Back in the black box theater of the Arts Center of the Capital Region in Troy for a variety of readers & words, with the hosts/MCs Nancy Klepsch & Me.

First one here & first up to the mic was Cathy Abbott with a poem about the Boston Marathon bomber, then another about attending her high school reunion. William Robert Foltin, host of an open mic at the Colonie Town Library, read his tribute poem "Nubian Princess," then a couple of Valentines/Spring poems, & some poems from one of his self-published chapbooks. Peggy LeGee was back with a couple of her introspective poems, "Speak Thy Night" & "Reincarnation."

Inna Ehrlich has been translating Russian poets into English & some of us local poets into Russian, including my poem "Kandinsky's Red Spot," which I read followed by Inna reading her Russian version. I also read Inna's translation of the Russian poet Petr Koritko's poem "Unwritten." Howard Kogan began with a tribute to the late Maxine Kumin, reading her poem "Watering Trough," then read what he described as "version 21" of his long, meditative poem, "In the Beginning" mixing baseball, poetry, his granddaughter, Mother Teresa & Olympic skaters. Mike Conner began with a poem about death, "The Dark," then one written after a day of working outside "Winter's Wolf," & ended with his version of a "Slam poem," "Rolling." 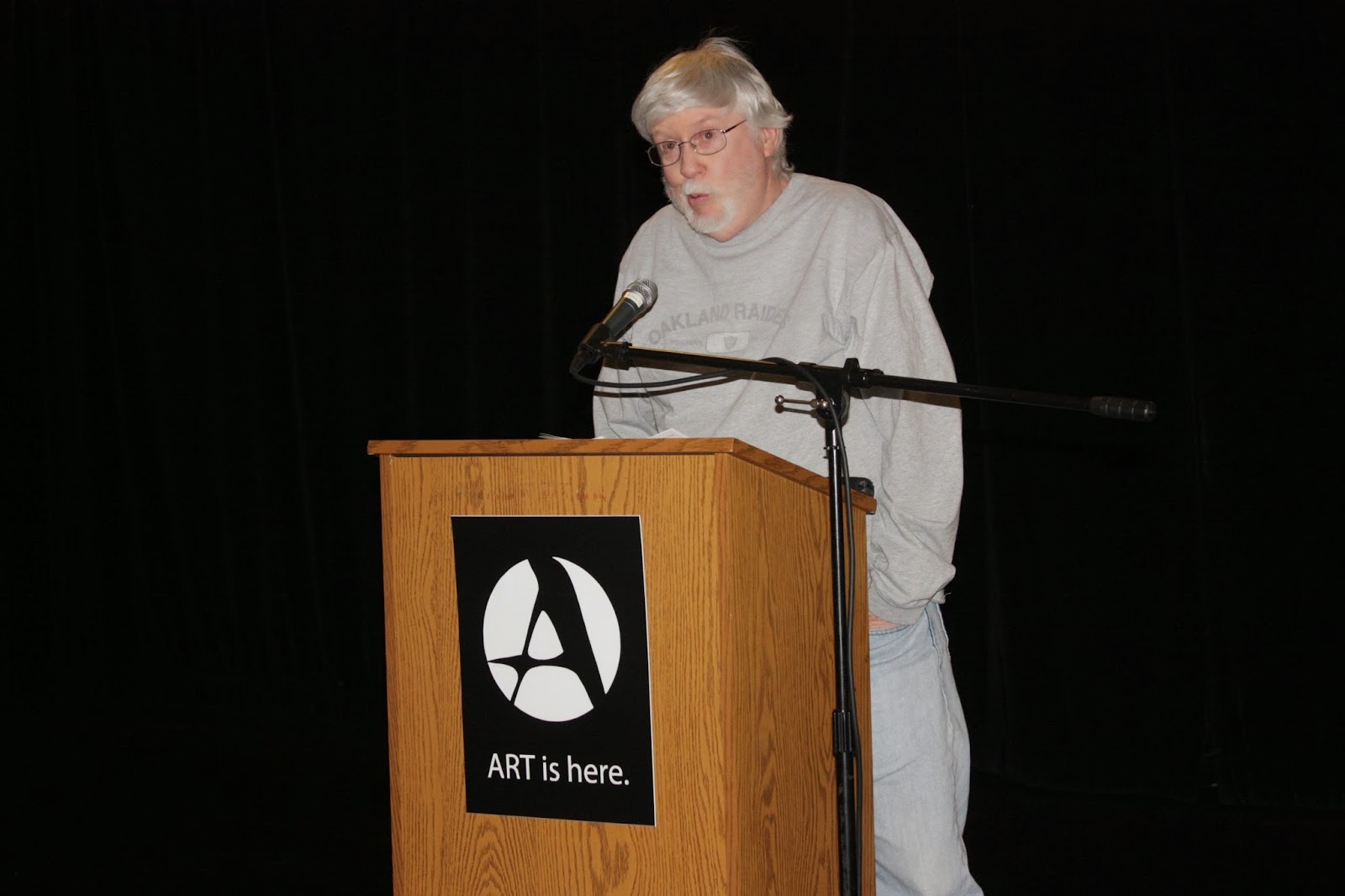 Bob Sharkey indulged in both parts of this open mic with a prose piece, "Clay" sounding a bit under the influence of Joyce, then a wistful poem "How He Regarded Her." Ron Drummond's single piece was a long comment he had pasted on a friends Facebook page, full of self-analysis & the struggle to be a good person. Miriam Axel-Lute read her poems from a "tablet" (or some such electronic device), first a poem about her kids leaving for a parental visit, "Eat What they Leave," then another of her re-writes of a story from the New Testament, ending with a tribute to the late Pete Seeger, "May You Leave a Hole." Jon Lloyd returned to read 3 very disparate pieces, the fantasy story "The Man in the Saliva Suit," a piece in legalese on copyright law "Create a Commons," & a piece on depression "Joy in Slaughterhouse Five." 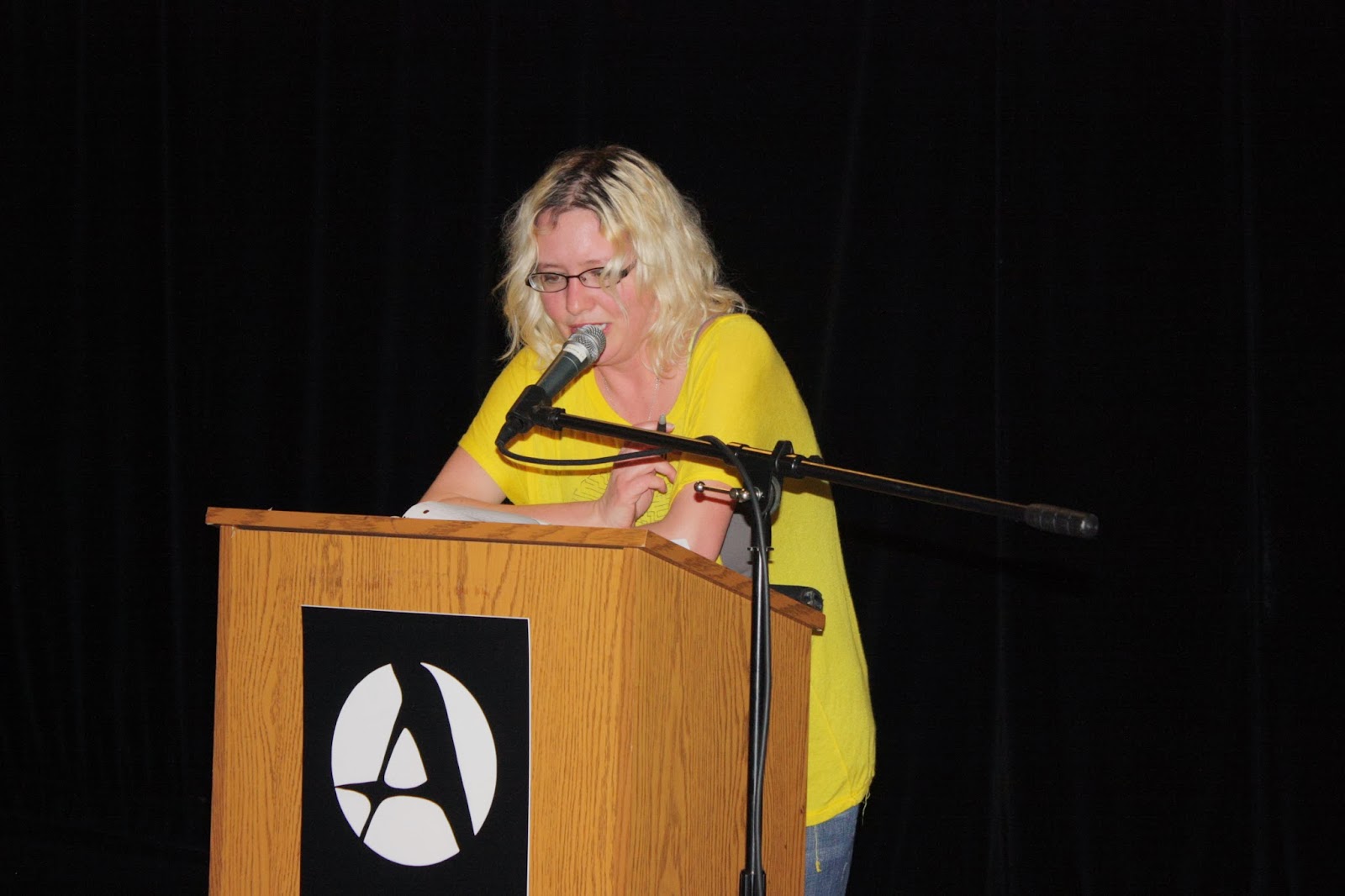 Shannon Grant had just 1 piece to read from her battered spiral notebook, "Galactic Gigantic," an infatuation poem based on a song. My co-host Nancy Klepsch began with "an old, old poem" on poets & friends "Invitation," then on to the latest version of the rousing "We Need an Army of Harveys," & ended with another old poem being revised, the rhythmic "Circle." Sally Rhoades was our final reader for the afternoon, with 2 pieces leaning heavily on memoir, the prose childhood story, "Youse Kids Had It Rough" & a poem inspired by a recent trip through the back streets of Miami, "Scrap Metal."

Most months of the year we gather here to hear prose & poetry on the 2nd Sunday at 2PM, the Arts Center of the Capital Region in Troy, NY -- & it's Free!
Posted by DWx at 2:02 PM