I knew that this reading has been going on for a while in Saugerties, hosted by Laura Ludwig, but it also conflicts with the Chronogram Open Word reading in Kingston, so hadn't made it here until tonight.  I wanted to see one of my favorite featured poets, Donald Lev, & I wanted to hear Chris Wood, whose work I was not familiar with. While there seemed to be some confusion about how many open mic poets our host could squeeze in, & when the features would read, etc., by the end of the night everyone had their chance.

Eric Fishbein was up first with an excerpt from a one-person theater piece he is working on, "C Minus," about someone thinking he could go to school to become a rock star. Victoria Sullivan also did a theater-like monologue about a homeless woman in New York City finding the Occupy Wall St. encampment. Adriana Delgado is a fine, young poet I've enjoyed hearing at open mics in the mid-Hudson area; tonight she did a small cluster of poems, "Upon Waiting for Spring," "The Great Anxiety," & the dreamy "Soliloquy & Synopsis in Sweet Sleep." 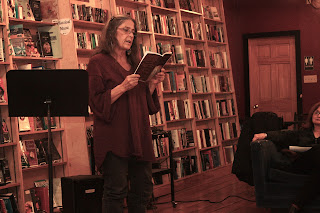 Pamela Twinning started off with a couple of poems, "Juggernaut" & "Danse Macabre," filled with intense, poetic images, then to a prose piece (memoir?), "Sunset Strip," about a teen-age runaway in Los Angeles in the 1960's. Mary Girodano's short notebook entry went by so fast I blinked & it was gone. I did 3 poems, "One Day Longer," "My Last Bardo" (just published in Donald Lev's Home Planet News (#65), & from Poeming the Prompt, "Looking for Cougars." 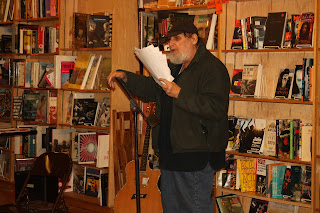 Donald Lev is one of the poetic resources that makes living in the Hudson Valley so exciting & rich. He has been publishing Home Planet News since paper was invented, first with poet Enid Dame, then, since her death, on his own. He read a stack of mostly short poems written in the last month. Many of the poems came from dreams (or seemed to), such as "An Elevator Filled with Wheelchairs," "Sundae," & "My Country's Battles." Others were more political & weighty ("Thick & Thin," "Death Before Dishonor"), while others were whimsical musings (in the poem "Respect" he has the trees thanking him for breathing). In a sort of Hanukah poem he skillfully combined the music of Duke Ellington & Jewish history. His tender poem "New Year's Eve" evoked past eve's with Enid, then he read Enid Dame's fine poem of Brooklyn in the snow, "Waiting." He ended chronologically with "Poem for January 7." 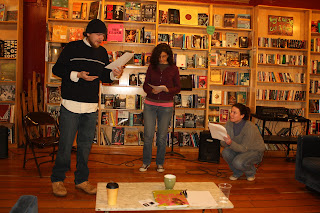 I was not familiar with the work of Chris Wood, so that became half of the reason to make this trip. He is the publisher of Heyday Magazine.  He began with poems, "The Cost of Poetry" (on being a publisher), the title poem of his chapbook America the Pitiful (Your Name Productions, 2011), "I Like that One," "Spleen" & "After Sipping Tea" which has been accepted for Home Planet News). Then on to some songs, his own ("Victory" & "Threshing Floor") & a cover of Van Morrison's "Into the Mystic." He ended with a brief scene from a children's story he wants to produce as an animated film, with Adriana Delgado & Marina Mati acting with him. 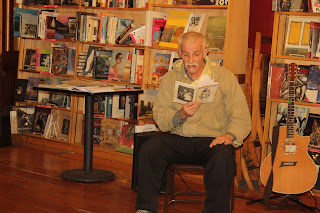 Andy Clausen was gracious while being subjected to uncertainty about reading, but fortunately stuck around to read his phantasmagoric tale, "The Bear," in his rich, sonorous voice. Marina Mati ended the night, first with a reading of "Good Night World" by the Yiddish language poet Jacob Glatstein (1896 - 1971), then her own poems, an untitled piece on being an exile rather than a tourist, "Chewing on Words" & "Long Moon Night."