We certainly do, sometimes. In McGeary's backroom it was a good night for local poets, with the featured poet, Bless, sharing the stage with new voice, Ben Golden, the whole thing under the firm hand of our host Mary Panza.

But first, I started off with 3 (holy mackerel ! 3! poems!), "Letter to Take on a Plane." "The Thunder,"& the old poem referencing the new terror in Norway, "Timothy McVeigh." Dain Brammage (Dale Walker) had 3 poems on the meaning of life, "Current" (vibrations & demons playing the blues), "My Sun is Setting," & "Musings on LIfe" (at the end). Todd Fabozzi read 2 poems from his book Umbrageous Embers. Tess Lecuyer has been digging through baskets of old poems & found a few to read, including "a sci-fi poem" "Aries" & the comment on winter as the season of forms, "November." 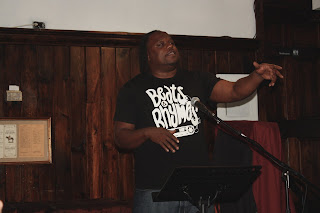 The featured poet was one of my favs, Bless, who did a short set, sharing his time with new kid on the block, Ben Golden. The first piece Bless performed (he does his poems from memory) was a meditation on how smoke & booze have shortened the lives of some of the jazz greats, that it's not the substances that make the music great, it's the genius of the performers. Then a very short bit of poetic advice to make any woman happy, & on to the tour-de-force that is said in the voice of a gun -- this poem should be performed in every school in Albany, heck in America. 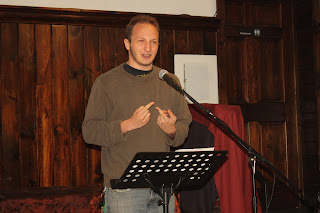 Ben Golden has been performing at the monthly Urban Guerilla Theater & was at Valentines earlier this month. "Night Life" was on wasting one's life drinking alone, then he had us laughing at the wild images in his sexy piece, "Note You Found Under Your Pillow After I've Climbed a Tree to Break into Your Bedroom." The final poem was "a fucked up dream" of the ATF at his door, aptly titled "Paranoia." 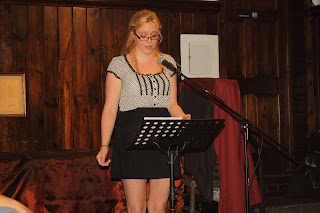 Jessica Fisher-Smith had also been at Valentines early this month; she read 3 poems, including "Shadow Games" about a mother's abuse, & the New York City subway poem "If I Hadn't Taken the N." Avery's piece "Letter" sounded like a draft of a poem being tossed away, while his second poem was a picture of his return to where he grew up in the Helderberg Mountains. Sally Rhoades had an old poem, "Little Pink Houses" (in Maine), & a new, just written piece about her father-in-law, "Cyprus Time." Nadi Morsch entertained us with the sleep-deprived ramblings of "I Know Dear." Mary brought Bless back to perform the appropriate "Closing Time," done to musical accompaniment from his smart phone.

Poets Speak Loud!, a project of AlbanyPoets.com is on the last Monday of most months, at McGeary's tavern, Clinton Square, Albany, NY -- good food, good drinks, good words.
Posted by DWx at 1:11 PM