Poets in the Park, July 9

This event is sponsored by the Poetry Motel Foundation (me) & the Hudson Valley Writers Guild (I'm the President), & I'm the MC, so what do you expect me say about this? Is there someone else out there to write a report on how much fun it was?

The readers were 2 "Daniels" -- Danielle D. Colin Charlestin & Daniel Nester -- 'though as someone pointed out from the audience, there were 3 Daniels present, counting me. But enough of me. 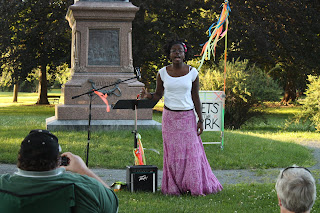 I had first seen Danielle D. Colin Charlestin at some of the area open mics & was impressed by the power of her words & performance. She didn't disappoint tonight. She started with a couple of short poems, "Before Translation" & a piece she had performed at WordFest, "God in the Rain." The next couple of poems were about urban experiences, "On the Corner of Washington & Swan," a portrait of a woman whose life is "singing the Blues like Bessie Smith," & another poem about a poet she met on a bus. Then a cluster of poems about Haiti; I didn't always get the Creole titles. The first was written after a visit after the earthquake, in which she stepped away from the mic to sway & sing & clap. The next poem was about a river & watching chlldren swim, from her first visit to Haiti. Then the tender & expansive celebration in "Haiti I Never Left You," like an anthem to the land & its people. A simple, funny haiku was all that was left. 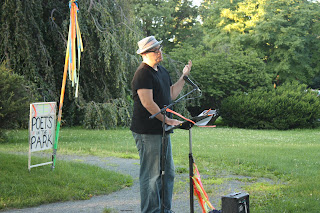 Daniel Nester (author of the collection, How to Be Inappropriate) was a change of pace, more in style & content than in feeling. He began with what he described as "the third poem I published," the account of finding an embarrassing childhood photo in the bottom of "The Ceramic Apple," then a piece on failed childhood musicianship, "Trombonliness." He read a group of short vignettes from a series he is writing about the people he knew living in Camden, NJ -- on music, smoking dope, weird characters smoking dope, & on smoking dope. Another series that he read selections from was the hilarious "Anatomy of my Mother," based on interviews with his mother, who basically raised him (quote/unquote). He ended with a poem based on the Biblical Proverbs, but I must've gotten the reference wrong; oh well, perhaps he just made it up, that's what poets do.

Anyways, if think this report is too glowing, just ask any one who was there & see what they tell you.