American journalism is obsessed with the concept of "objectivity." But this is a chimera. Objective reporting cannot (based on everything we know about human psychology) exist. Most other developed countries in the world are not concerned about this concept, they have their "right-wing" newspapers, & "left-wing" TV stations, & it seems simpler for folks to know the point of view when assessing the veracity/accuracy/whatever of the reports they see & read, rather than reading "objective" news that has an un-acknowlged bias.

That said, I (who am one of the organizers of this event) think this afternoon's event was great. This is the first in a monthly series at the Arts Center of the Capital Region on the 2nd Sunday of the month, in the "********** Theater." My co-conspirator/host, etc. was Nancy Klepsch. It was an open mic for poets & prose writers, with flexible, expanding & contracting time-limits. 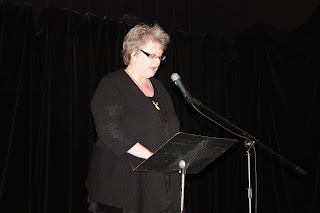 Kate Laity started us off with a story from her collection Unikirja: Dream Book, based on Finnish myths & legends, this one that werewolves keep their tails when they return to the human world. Mimi Moriarty read companion pieces about the Philadelphia Mummer's Parade, attended in memory of her father; these from 2009 & 2010.

Ron Drummond read a selection of poems, often using technical, scientific language, even when describing the leaves falling from the trees. I proposed that my poem "I Want to Read My Love Poems" was written as un-focused & loose, then commented on the use of terms "poemer" & "Poeming." Tim Verhaegen somehow got me into his poem about strange characters at the Empire State Plaza, "Mr. Fig-a-Wiggers Sister," then commented on the corporate racism, etc. of upscale law firms in "Osterman & Whiteman."

Sally Rhoades' prose piece "The Outpost" showed that her background as a poet made her prose that much more rich. Mary Panza hit us with 3 pieces, first a melange of characters at Dunkin' Donuts & shopping in the world of housewives, then the changed existence "In a Post-Partum World" & the short zinger, "The Cock-Kicker Manifesto." Our co-host Nancy Klepsch ended the afternoon's reading with a meditation on the decline of "Troy," then from the journal Oberan, the homage to B.B. King, "B.B.'s in the House."

Join us on the 2nd Sunday of each month at 2PM at the Arts Center of the Capital Region in Troy, NY -- Free!!
Posted by DWx at 6:37 PM

From Therese L. Broderick -- I have a standing commitment until 3pm every second Sunday of every month. I regret that I may never get to this new open mic.