A hot night at the Social Justice Center: the weather, the featured performer & the open mic poets; it's a wonder the place didn't catch on fire. Our muse was Tuli Kupferberg singing his anthem, "Nothing" from the Fugs 1st album. Tuli became star-dust this week.

We began as we often do here with Alan Catlin, tonight reading "Lady Day Sings the Blues in an Open All-Night Club," starting off the night's jazz theme in another Hot place. 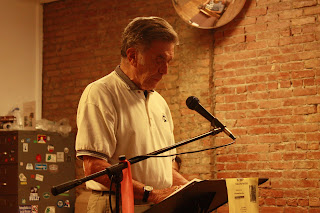 The first of the night's virgin readers was my colleague from Veterans For Peace, Ed Bloch, who read his poem "The Horla", from his book on his experiences in World War II, Courage, Coward, Courage!! - Steps Along the Way. Bob Sharkey's poem incorporating paintings from the Metropolitan Museum, was "The Blues at Dawn", with references to Jason Crane's poems & his legendary bag. Brian Liston was also here for the first time & performed his short, signature poem "The Autistic Super Kid." Don Levy read his new poem (you can find it on his Facebook page) "All Hand Jobs On Deck, or Boop Me All Night Long" (Popeye & Betty Boop having sex, if you must know). 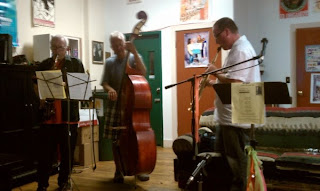 When I invited Jason Crane to the featured poet here, I wasn't surprised when he, the host of The Jazz Sessions online, proposed a jazz-themed reading. However, I was shocked when he asked me to play saxophone with him (obviously he had never heard me play). So tonight was the debut (& undoubtably the final) performance) of The Poet's Jazz Trio: Jason Crane on soprano sax & poems, Tom Corrado on bass, & Dan Wilcox on alto sax & percussion. Now in one of the wonderous ironies of Life, the technology that makes this Blog possible & easy to do, also makes this Blog obsolete since Jason recorded his/our performance & you can hear it yourself, rather than read my rather Gutenberg-era summary. But I will press on.

Jason dedicated his reading to Gene Ludwig, the jazz organist who recently left this Earth, reading his poem "Gene Ludwig" (from Unexpected Sunlight, FootHills Publishing). Then the group began by slaughtering one of my (& Jason's) favorite jazz tunes, Thelonious Monk's grinning "Blue Monk." "91" was to/about another gone jazzman, Hank Jones, with Tom's walking bass, then the slow, dark narrative "Blackout." He brought us back to the day's news with "Deepwater Horizon," then the sad vignette "First Night." "Oh Lord" is a tribute to Mingus & the new social/survival issues of our time, ending with a sax solo. Sun Ra, though "up there" too, is still a lot of fun to hear, & Jason's tribute ("To Swing You") to this weirdo jazzman/spaceman tried to give a taste in words, with Tom & me in the background. "Strings" was about cats & their guts (or our own). "Long Day in America" is another vignette with accompaniment, then he ended solo with a solitary writer "Stephen Edward."

So after the break I read, of course, "Acrostic Jazz" for Thelonious Sphere Monk. W.D. Clarke's poem was an adult fairly tale, "Ebenezer's Bed." Our bassist, Tom Corrado's tongue-in-cheek poem "A History of the World in Four-Line Feeds: Part 17" began with a quote from Jacques Derrida. Alan Casline's "Spontaneous Blues" poems were written in pocket notebooks, like Kerouac, tonight he read Chorus 5, listening to a bird. Moses Kash III just wrote/re-wrote/edited "Wasted Souls" today, about the invasion of other countries by the USA, but ending with ice-cream. Julie Lomoe's "Slump-a-Dump" was in rap rhymes on her writers' block (if you write about your writer's block, does that mean it's no writer's block?). 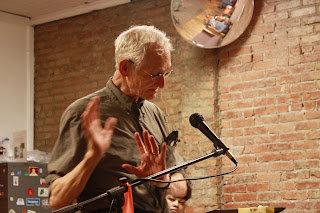 Another first-timer at the SJC, Malcolm Willison, said he was glad to finally make it here & read a political piece, "Up-sizing." Avery was still another SJC virgin, with a piece of paper "In My Pocket." Ed Rinaldi's short poem, "I Could Be Asleep Instead," was inspired by Theodore Roethke. D. Alexander Holiday read a chilling poem of childhood trauma by Bruce Weigel, "The Impossible." Sometimes, just by being at the end of the list, you end up being the "ultimate" poet, & so Terry Bat-Sonja was the last up & read an untitled lush description of a bird on a lawn.