The WPS meets on the 2nd Saturday of each month at the Woodstock Town Hall on Tinker St. This was a lovely day to be walking around & to be reading & listening to poets, the host, Phillip Levine. I hadn't been there in quite a while, but made sure to rearrange my schedule to catch my dear friend Alison Koffler as one of the 2 featured poets.

As so often happens, even when I get there after the sign-up sheet has been out a while, I ended up as the first poet to read, the somewhat out-of-season "Planting Tulips" & the very current "44,000 (May 4, 2010)." Following me, Trina Porte's 3 poems were short & printed out as half pages the long way. Daphna Rosenbloom in an early tan did a couple from memory. Phillip Levine jumped in with just his "Heels." Donald Lev said his 3 poems were his "last 3 poems, at least so far…" & also read Enid Dame's "Inheritance" for Mother's Day. Dayl Wise read "2 new poems," one about being on the rifle range in the Army when the moon landing took place, the other a marvelous poem to his wife Alison about making a garden, "A Relationship." 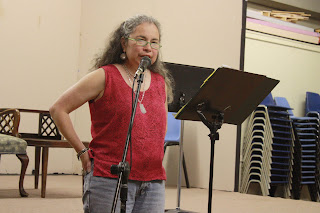 As many of my regular Blog readers know, I'm not a big fan of animal poems but Alison Koffler's animal poems are of a different breed. In "For Atha, Wolf Ambassador" & "Zoological Society Meeting" she ponders the confrontation of the captive wild with their captors, while "The Animals of Blazing Stars" are imaginary, poetic creatures. The Bronx was the setting for "The Cyclist," "First Apartment" & "Walking Back thru the Bronx," while "Unmeasurable by Standardized Testing" was about being a teacher. Dayl's earlier poem about her was filled with sweet peas, Alison's poem for him was "Zucchini." She remembered a Grateful Dead concert with a friend, then ended with a poem back in Woodstock, "In the Garden Cafe." 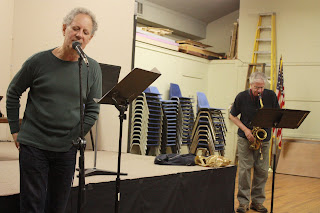 Barry Wallenstein loves to incorporate jazz into his readings & today his accompanist was Gus Machini on alto sax. Some folks in the audience complained that the sax was too loud at one point but I think such performances are collaborations in which it is not necessary to hear every word of the poem, just like we don't always hear every note of the music. In addition, some musician once told me that the saxophone is pitched like the human voice so that it tends to cancel out the vocalist. I thought it worked well here today. Barry began with a couple pieces ("Big & Little" & "Paranoia" -- as in something will get you someday), then on to a big middle section of his "Tony poems" in the voice of a NYC street person, running the gamut from Tony's personal musings, to politics, to even a bit of the poet's autobiog ("Tony's Dad") -- gritty, urban & tenderly human. He ended with a villanelle ("Inside Our Heads Devil Designs") & the marvelous prayer "Great God Nature."

Both of these featured poets put on thoughtfully prepared readings that they had obviously planned & rehearsed, no confused flipping of pages or checking on timing with the host, veritable models of how to do a featured reading.

I can always get the titles correct for Ron Whiteurs' poems because he puts them up on a music stand, like an old vaudeville show, & I always laugh at his outrageous sexual humor, like today's "Don't Let Him in Your Underwear" (was he pointing at Phillip Levine?), & "What Jeffrey Dahmer Said to Me As They Dragged Him Off to Prison." Phil Sullivan followed with a couple of Spring poems & a political piece. Susan Sindall read poems from her new poetry collection What's Left from, as she said, "younger times."

Jay Wenk read a seasonal poem, & one on the big questions of God & youth, then "5 Borough Bicycle Ride" (with wounds of a recent bicycle accident on his legs), the second bike poem of the day! Bruce Weber read "Love Falling In" from Will Nixon's new book Love in the City of Grudges, then Will Nixon was up & sandwiched his poem "The Night I Saw the Clash" from his new book between a piece by Denis Johnson & one by Bruce Weber from his book "Blue Flower."

Berel Berko's pieces were notebook entries playing with word sounds, other journal entries & clever sayings he's very pleased with from his yellow pad. Phillip Levine ended the day with yet another Spring poem, "No Use."

The Woodstock Poetry Society meets every 2nd Saturday at the Woodstock Town Hall (at least for now) at 2PM.
Posted by DWx at 7:40 PM