I wan't there for the entire "5 Days of Poetry & Music" organized by Boog-Guru David Kirschenbaum but was at for the book fair & readings at Unnameable Books on Vanderbilt Ave. in Brooklyn on Saturday & Sunday, September 12 & 13. I had a table for A.P.D. (Albany's Poetic Dynasty) & was scheduled to read on both Saturday & Sunday. 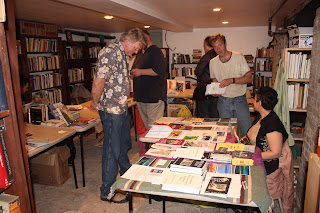 Due to New York's rainy late-summer we set up on Saturday in the basement of the bookshop, the small press displays crammed together on folding tables among the old books with barely room for customers & listeners. I missed Rachel Levitsky, who had once read at the Readings Against the End of the World years ago, but did catch my table-mate Wil Hallgren (Stubborn Plant Press) & his political limericks, then Lydia Cortes's Puerto Rican memories, & Jill Magi's deconstructed L.L. Bean catalog before it was decided that the rain had stopped enough to go upstairs to the courtyard. Enough but not entirely.

When we finally got going again, Ivy Johnson read a series of her short poems, then Austin Alexis with his hospital/AIDS poems, Douglas Manson with some "table" poems, & Stacy Szymaszek from her book Hyperglossia (Litmus Press). I began to realize that some of the poets were leaving my head fuzzy while others spoke to me. The pattern for the day so far was short, fragmentary poems, but while some were mechanical exercises others dealt with the sometimes fragmentary nature of modern, particularly urban, experience. Mina Pam Dick's fragements came from her living in the city & were saturated with her presence -- good stuff, not just clever words. 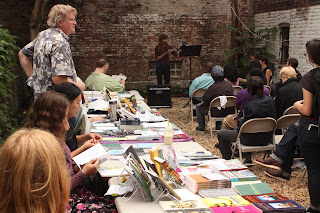 Continuing on through the afternoon we heard Jennifer from Fence Books (another Albany connection, which somehow went unmentioned), Geoffrey Olsen from EOAGH: A Journal of the Arts, Cory Frost representing Ellipsis Press, Christopher Stackhouse from Corollary Press, & Andrew Hughes from Book Thug. I bought Jennifer L. Knox's book (Bloof Books) after being entranced by her sexy, funny poems, such as the one about Liberace. The afternoon was getting late, I was tired but I did catch Marcella Durand (Belladonna) & former Albany student, Karin Falcone, who had read at the QE2 open mic back in its day & still putting out the hand-made arts/lit zine artICHOKE. I was the last of the small press readers (reverse alphabetical order this year) & brought a bit of historical/political direct-statement to the day.

I regret missing my friends Katie Yates & Ammiel Alcalay as I was stashing my stuff, but was pleased to catch Jim Dunn who included in his reading a tribute to Garrit Lansing, as well as some of Garrit's own poems. The move to the courtyard exchanged the problem of a crammed, hot space with the danger of rain on our books (there was a brief sprinkle during the readings, but we were supplied with plastic tarps to protect our wares), & a very noisy gravel surface. But overall it was good to be outside & everyone was good-natured about the crunch-crunch while poets were reading. I wish I could've stayed on into the evening for more poets, but even my poetical ass gets sore & I did need a drink & dinner. & I give a lot of credit to my son Jack for hanging out with his old Dad.

Back again on Sunday, a better day for weather & the gravel quieted somewhat with some carpet & plywood -- you live & learn. It was a day of slightly longer sets, from Paul Foster Johnson, Eric Gelsinger (whom we've seen in Albany reading for Flim Forum Press), Joanna Sondheim, & Tracey McTague. I'm not usually a big fan of singer-songwriter entertainers, but perhaps it's because Alan Semerdjian is also a poet that I found his work so interesting. Martha King read a prose memoir, "A Little Tale of Family & War, 1977" that referenced the work of her husband, Basil King, who read after me & just before the panel. But in the meantime Brendan Lorber gave us his humorous, ironic urban tales. I followed reading poems by A.P.D. poets Anthony Bernini & Mary Kathryn Jablonski. Basil King's poems were, like Martha's, a memoir of his life & work as a visual artist. 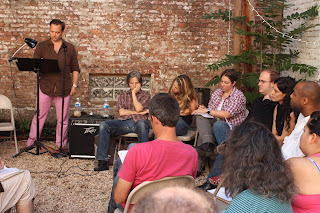 A good chunk of the afternoon was taken up with a bevy of NYC & Brooklyn activists, artists, writers, etc. discussing "Thinking Globally & Acting Locally in the Aftermath of the Global Capital Meltdown" moderated by Greg Fuchs. With about 10 people on the panel the discussion fragmented like the poetry we'd been hearing the last 2 days, but certainly the highlight of the discussion was a comment by David's mother on the emphasis in schools on technology rather than reading poetry. Too bad few of the panelists hung around before or after they shot their mouths off to those of us who did hang around.

The poetry continued with Corina Copp, followed by the random everyday experiences of stalwart Lewis Warsh. 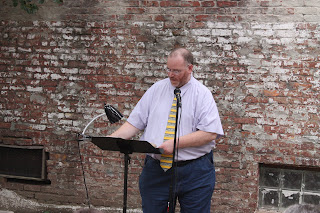 Our omnipresent host David Kirschenbaum read a poem on the "Swoosh" logo. He was followed by Philadelphia poet Hailey Higdon, then the last one I caught before packing up, the short poems of Shanna Compton.

Just too, too much poetry for a body to bear, but exhilarating to be among so much word-energy, & a great counter to stuffier venues taking place elsewhere. I think the short answer to the panel discussion was the community of poets & small presses gathered here together in the courtyard of Unnameable Books & in the other venues throughout the City during Boog City Festival. If you're in NYC you can pick up copies of Boog City at lots of the hip places, or visit the website. Thanks David.