Back many years ago, I was a featured poet for the Stone Soup Poets in August, 1993 when they were at T.T. the Bears under the direction of Jack Powers. Tonight, I was at "Out of the Blue Gallery" in Cambridge for another Stone Soup Poets event. According to their website they have been at it for 38 years. Jack Powers, in the audience tonight, was showing the ravages of Time, but attentive to all the poets while the reading was under the capable direction of Chad Parenteau. It was an exemplary night of community poets & poetry with all that that implies & thus a fitting end to "the Unibrow Tour" for LisaAnn LoBasso. 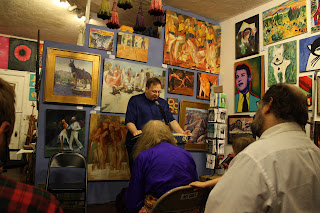 Chad began with Philip Levine's "What Work Is" then Karen Gault, who had just arrived, read "Night Lights" & "Dream". Harvey Rudman was the first of the night's guitar player/singers. You might find some of this up on YouTube (or on a cable station in Cambridge or Lowell) because Bill Perrault was videotaping the event; he also read a couple poems, one about being in Italy, the other in silly rhymes, "I'm Tired." I read, to a new audience, again "The Spa."

Stephan Anstey, the publisher of the journal Shakespeare's Monkey Revue, read "One Bad Woman is All it Takes," & "Trippin' Moon." Randy Barigh read a rhyming nature poem, "On this Rock," then "The Battle for Evermore" about stars. Debra Priestly's just written "One" was full of sunflowers & touches. William Clark's journal narrative became a rant about the homeless. James Strauss' 2 poems were untitled, although someone in the audience suggested that he call his "silly" piece about "little gnomish men" "Politicians" (must've been from New York State). Laurel Lambert's short descriptive phrases from her battered notebook could've been just a series of lines or a long poem in the making -- why we poets keep scribbling in those battered notebooks. 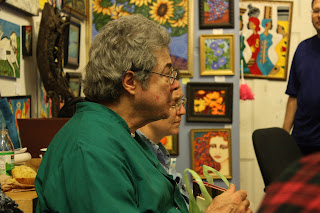 Chris Robbins read again the poem he had read yesterday at Cafe Olio ("Granola Parfait"), but before that did a "just written" poem for children, "Magic One." Edward Gault (who had signed his wife up first for the open mic) read about a dream of winning the lottery, "Sweet Dream of Aphrodite." Margaret Nairn, who was caring for Jack Powers (shown in the photo to the right), read her urban poem of recycling trucks & city rain, then read Jack's "At Bat (for Johnny Urlich, a Southie Dude)" hitting against Mr. Death, from Jack's chapbook, The Inaccessibility of the Creator (Ibbetson Street Press). 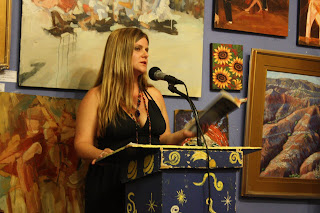 This was the last reading on LisaAnn LoBasso's tour & it was appropriately energetic & tender, poetic & earthy. She began with "Another Love Poem," then on to "My Lost Uncle," "Ojai Deliverance" (oh how I missed Tom's harmonica), the intense emotion of "Upon a Sick Child," "For Micca...," "Retreat," "Elsie in Us," the 2 sugar poems: "Sugarloaf" & "Sugar Coating (A Love Poem & My I Do)" (written in April & not in her books), ending, as she does, with "Melt," the sweet sounds fading out for the last time in the air of this Atlantic coast city.

With so many poets on board, Chad took us right back into the open mic with Walter Howard's "White Goddess" & "Mid October 2002." Eric Nelson piled up images in his tribute to cormorants then deconstructed a news story on a runaway truck. Carol Westly paid tribute, this time to a World War I soldier, Keith Douglas, with photos & a dramatic reading of her poem "Time Eating." Chandler Goodallen read "death haikus" for Michael Jackson, David Carradine, & Farrah Fawcett, then a piece on friendship, & a poem, "Asylum," for Bill Barnum who has just slipped in.

Catherine Wang-Hsu's poems "River of Life" & "Pearly Rice" were quietly stated, descriptive, philosophical. The second guitar man of the night was Alex M. Eisen-Cuadra with a rhythmic original song. John Stern's "spoken word medley" of songs of the 1930s & 1940s was way too long (or did it just seem that way?). And then I almost died when James van Loy began his reading reciting a 1940s pop tune, but he went right into a personal narrative on death, then did a wonderful piece on Jack Powers, his comrade poet ("the best part of the trip"). 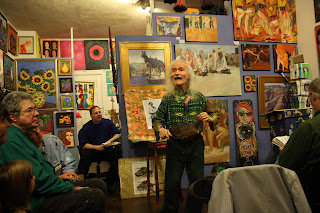 Bill Barnum has been a fixture in the poetry/performance scene in the Boston/Cambridge area for many years. In spite of a tremor & quiet, slurred speech he gave a riveting performance of 3 short pieces that ran seamlessly together (I know there was a Centaur in there somewhere). I'd love to have an hour with the little red notebook he had with him & consulted just before he performed.

I was so pleased to have joined the final leg of LisaAnn's tour & thus to have ended up here tonight among such richness of words, history & legendary poets. May the Stone Soup Poets have another 38 years!
Posted by DWx at 4:04 PM

Just found your blog, and am very grateful for the time and effort you've gone to here. Great and varied taste
___________________
rozy
Increase your brand popularity overnight

Appreciate you posting this here.