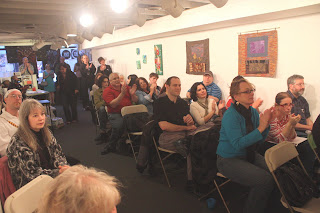 How do you report on 12 hours of poetry & all the accompanying gagaga? I don't need to list every poet, every poem because I'm expecting the complete documentation to be up on the albanypoets.com website eventually. So I'm going to comfortably summarize until my fingers get tired. I was there (although I missed the cocktail hour) from 7:00 PM Friday night, until 6:30 AM Saturday. I heard things I can't repeat & saw things I don't remember, but what's left, you'll get.

There were virgins, like Robb Smith (who comes to a lot of readings with Julie Lomoe) doing haiku, & Christopher Brozek who included poems limited to 160 characters. And poets who could've been virgins, Kenny Dawes, the first poet of the night, with a wonderful poem to Albany from his notebook, who was followed by Chad Lowther who had the universal description of a poet's repertoire: "I have 2 poems, 1 shorter than the other."

There were the formidable Voorheesville poets down from their every-other-Thursday night gathering -- Alan Casline with his own toy mic, & 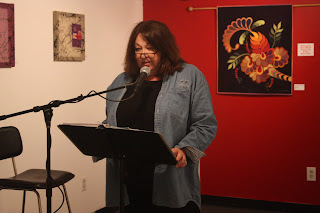 Barb Vink whose cell phone went off during her reading of a poem with a ringing phone in it, & the rarely seen Ron Pavoldi describing rubber ducks in the ocean, & gay Tim Verhaegen & spiritual Dennis Sullivan & the night's only brother & sister team, Mimi Moriarty & Frank Desiderio, with back & forth companion poems, & Tom Corrado "Eating an Elephant" & "Obedude", whose handwriting Mary Panza (did I say yet that she was the host?) described as being "like a serial killer's."

Then there was "the Murray Group," Thérèse Broderick who is frequently seen at open mics around town, introducing poets who are rarely, if ever seen, Heather Moore Niver, Laura Whalen & Lynette Noonan with her anti-war poems.

Strangely, for a poetry reading, the night frequently got ahead of schedule & so breaks were occasionally declared to get us back on track. Bless filled in at one point, having not signed up but was available in the audience (actually, there was another Bless who read later, sort of a walk-in). A cluster of not-surprising no-shows added to the problem, and most poets stayed well within their time. But then Albany is not Woodstock in oh so many ways.

Others who are frequently at readings but we don't often hear were Frank Robinson, & Harvey Havel with a section from his novel. Kristen Day took pictures, as well as read including the list of things that piss her off at poetry readings. 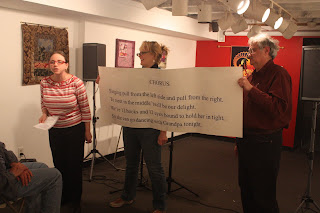 Another group of poets, but one that did not read as a group (but who later spent the night, I mean morning, at my house) were from Connecticut. Terri Klein broke us up & got us singing the sea chanty about fastening her grandmother's bra. Tom Nicotera did poems about his lawn & bars & played his Irish drum, and Joan Pavlinsky did powerful political pieces & a great take on the mental status exam.

Other poets who travelled some distance to be here were Cheryl A. Rice doing poems on beer & angels, & Mark DeVit ("Nuwanda") & Laura Lightfoote (both from the Glens Falls scene); Mark had read recently at "Live from the Living Room" & Laura was a dynamite performer who gave me yet another reason to get on the road to Glens Falls. Also from up that way was the "Master of Poetic Hysteria" who was "Hopping Mad." 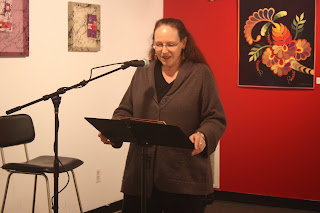 om Jason Crane & Julie Lomoe, John Weiler, Todd Fabozzi, & Shannon Shoemaker (with a poem for the open mics), & el presidente filled in other abandoned slots. Tess Lecuyer pulled out poems from 1986 that I swear I heard her read together before.

Dominick Rizzo made a natural link between suicide & the Mets (sorry) & Matt Galletta did found poems & covers of his friends work.

By the time Chris Brabham read most folks had left, & it was into the wee-hours. In fact, there was no one else signed up on the official list until 6:20AM. I've got to say this about AlbanyPoets, these folks have commitment, they wouldn't just abandon ship & let Sylvia Barnard confront a locked door & dark gallery at sunrise, they wouldn't not be here for AC Everson & "Wake, Break & Bake" scheduled for the finale. AlbanyPoets are tough. It was a 12-hour reading & they were going to be there. And they were.

The honor-roll includes Chris & Sabrina, who stayed for the early gossip & YouTube, well beyond the call-of-duty. Those of us who stayed until Annine came in with coffee & munchkins, & turning on the lights, were Mary, Thom, Keith, Cheryl, Matt, Rob & me. Thom had turned off the video recorder when there were no poets left so unfortunately -- or actually, legally, morally & ethically -- there is no record of the gossip & trash-talk that spun us into sunrise, or at least until we turned out the lights. 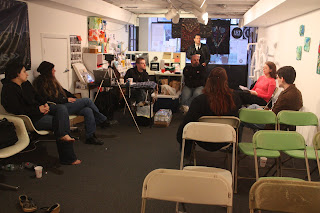 Right behind the arrival of coffee was a poet looking for a reading, Brigid Schmidt, who had intended to come back at 2AM & had slept through her alarm, so she read at 6AM. AC Everson ("Breaking My Art") got around to smashing her dice piñatas.
As we picked up the trash, Sylvia 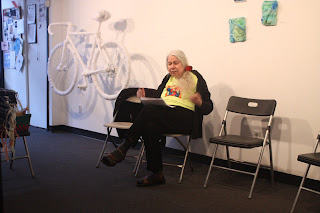 Barnard arrived for her slot with an Easter poem & poems about the end -- & we were done. Not ex
actly 12-hours of readings but close enough for poets.

They are already planning next year.