Mary Panza, our host, was proud to have actually set up the microphone & music stand all by herself. And was getting itchy to get to the featured poet, so she got us going on the open mic. 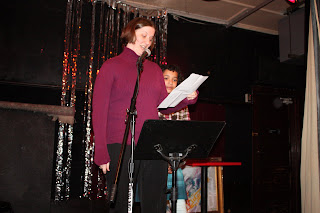 Kim Henry has read her poem "Mis-matched" before, funny take on child fashion-police; tonight she read it in tandem with the poem's inspiration, her daughter Alexis Harris. Alexis has been coming to readings for years, usually to sit & crayon or do her homework; it is great to see her stepping up on the stage with her Mom.

Julie Lomoe continued the inter-generational theme with her poem on the joys of a baby-sitting Grandma, "Goofy Grandma Thursdays." It was great to see the host of the Caffè Lena open mic, Carol Graser down in the big city again; she read "Her Hands" (based on a picture of a woman making bread) from a new collection, Ekphrasis: Art Into Words, edited by Kathie McCoy and put out by the Adirondack Community College Foundation. I inadvertently set off a "religion" theme for the night with my poem "Dancing on the Mandala" & blowing bubbles, my version of a sand mandala. 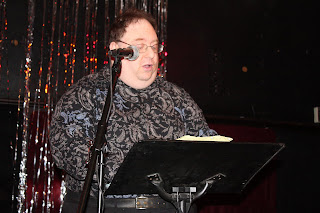 A featured reading at "Poets Speak Loud!" has been a long time coming for Don Levy but like wine (or sex) the time has to be right, & tonight it was. Don had an appreciative crowd of friends, newer poets & the surprised & shocked strangers. He read mostly newer poems, lots of politics, &, of course, his signature "gay fantasies." This self-described "heavy-set queer poet" began with "The Inaugural Poem I Never Got to Read," then the funny incident described in "Throw-down at the Albany Public Library" (I hope that woman in the jean-jacket never shows up at one of his readings). "Ad Man Falling," poem like movie credits, was something new I hadn't heard before, as was the dream poem, "Mexican Bar Dream," where I play a role in the drama. Don's funny gay sex images playing on stereotypes of nationalities in "Why I Never Had a Foreign Affair" nearly brought the house down, as did his attack on the Kelly-green silliness of St. Patrick's Day, "So Many People Have His Lucky Charms They're No Longer Magic" (or was that last word "Delicious"?). Don could do a performance just by reading his titles they're so good. He ended with a double-barrel attack (with the repeated refrain of "...fuck that shit...") on homo-phobia, "I Am Faggot Hear Me Roar." We sure did!

Bringing us back to a quieter reality, Sylvia Barnard read what she thinks is the last poem about her mother, who died last year, "The Last Farewell." Sylvia's introductory remarks about being made an orphan at the age of 70 I think would make a humorous poem. R.M. Engelhardt returned to the theme of religion with his new piece "In the Church of Coffee & Smokes," as good as any, I guess; then continued with a poem filled with his favored images of fallen angels, love, poets, poetry & centuries, called, I think, "Et cetera, Et cetera" (although when he first said it, I thought it was called "Excedrin, Excedrin" -- my mistake). Thom Francis did an a cappella version of "Shower," more images of religion, but you have to hear him do it with his band (perhaps at the upcoming WordFest).

If you want to read Tess Lecuyer's poem "Vert," a longing, seasonal piece, you can find it on her FaceBook site. Her second poem, like a pantoum or expanded sonnet, "Another Buddha," bounced off my sand mandala. Dominick Rizzo read 2 new poems, an untitled piece where someone breaking into a liquor store was a metaphor for screaming for help, & "Fire." Also reading new poems was Amanda Rose (as lovely as her name), the sexy, but unfulfilled "1:09" (the time it was written this AM), and one written last night, listening to the compliments of customers, "Stop Talking."

Chris Brabham reminded us poets of our ancient role as the source of knowledge, passion, & social change in "The Poet;" he also reminded us what a fine love poet he is with the direct, straight-talking catalog of the best things about love, "Give Me A Love." The last poet of the night was back again, Jonathan Jones with the first poem he wrote, at age 16, challenged by his Mom to imagine the birth of "The Drug-Affected Child." His second, untitled piece dealt with social issues & the worth of the individual through rhyme & sound-play -- I need to hear it again.

Another great night on the last Monday of the month at Tess' Lark Tavern on Madison Ave., in Albany. Check out the AlbanyPoets.com website for what's going on with WordFest 2009.
Posted by DWx at 10:17 PM

I had a great time that night. Thanks to everyone who came out. Don

Don, you may be working on a triple chin but it is clear, from Dan's blog, that your wit grows apace. Best Wishes and all that.

Is that supposed to be a compliment? Because it is OK to comment on someone's weight? Really Gil?

Gil, I haven't seen you for what...20 years and you have to start off with how heavy I am? Thanks alot! Don

Gil: Maybe you should start work on a triple chin or something else tangible that you can succeed in because your wit sucks.
- Kristen Day

Wow, Gil. Guess if we met when I lived in Albany, you would've told me to "eat a hamburger or something."

Hello Don, Mary, et alii, long time no see. Don, I've seen numerous internet reports, as I recall, that you yourself regularly make light of your "growing stature" in public appearances. I should have realized that, regardless, you would prefer that only you make reference to it. Nonetheless, it is clear, from those same reports, that (in other than comment sections, perhaps) you've expanded upon the wit which marked your appearances and company those many years ago. The best wishes were and are genuine.

It is a pleasure to see the Albany open-mic scene going on much the same as always after all of these years. Lol all!

Good day !.
might , probably very interested to know how one can make real money .
There is no initial capital needed You may begin earning with as small sum of money as 20-100 dollars.

AimTrust is what you thought of all the time
The firm incorporates an offshore structure with advanced asset management technologies in production and delivery of pipes for oil and gas.

It is based in Panama with structures around the world.
Do you want to become a happy investor?
That`s your chance That`s what you wish in the long run!

I feel good, I began to take up income with the help of this company,
and I invite you to do the same. If it gets down to choose a correct partner who uses your money in a right way - that`s the AimTrust!.
I earn US$2,000 per day, and my first deposit was 1 grand only!
It`s easy to get involved , just click this link http://cycubiba.envy.nu/jiwinu.html
and go! Let`s take this option together to become rich

Hi !.
You re, I guess , probably very interested to know how one can make real money .
There is no need to invest much at first. You may begin to get income with as small sum of money as 20-100 dollars.

AimTrust is what you need
The firm represents an offshore structure with advanced asset management technologies in production and delivery of pipes for oil and gas.

Its head office is in Panama with structures everywhere: In USA, Canada, Cyprus.
Do you want to become an affluent person?
That`s your choice That`s what you really need!

I`m happy and lucky, I began to get real money with the help of this company,
and I invite you to do the same. If it gets down to select a proper companion utilizes your money in a right way - that`s the AimTrust!.
I take now up to 2G every day, and my first investment was 500 dollars only!
It`s easy to join , just click this link http://uwajulij.mindnmagick.com/yqygufa.html
and go! Let`s take this option together to feel the smell of real money