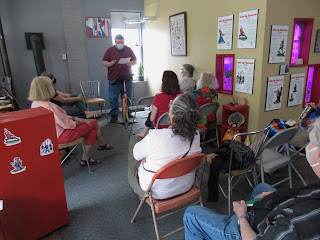 Thanks for your mention, Dan, and for not putting down my poems, although calling "Dancing Nude in the Back Yard" as frighteningly imagined is questionable. This is a great venue--thanks to Avery for the exotic ambience and the mushrooms.

It's just that the thought of seeing such a sight scared the shit out of me!