Yes, we were back again at the Albany Center Gallery for an eclectic evening of the sounds of words & a guitar. & an activist-oriented reading at that. Matthew Klane & James Belflower were our hosts & MCs. 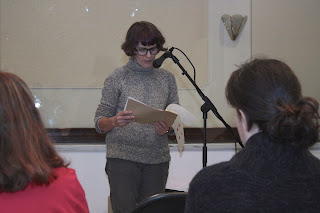 Lee Gould gave a quiet, undramatic reading of often difficult poems. But the work engaged some of the world-wide issues. Her first piece dealt with “invasive species” — what, who, why are they — as much a matter of how we define things as an ecological issue. “Rationale” was read from a hand-made book (she is also a print-maker & crafter of books) with references not only to the Wa-Wa convenience stores, but also to native Ojibway culture. Her last piece, “Man Made” was a meditation on the manufacturing of our clothes, beginning with an image bag of her daughter’s cast-away clothes leading to thinking about a fire in a Bangladesh factory where many of those clothes could have been sewn. 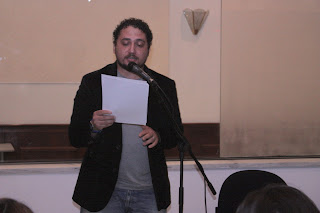 Victorio Reyes, a long-time social justice activist, & performer in this area, gave a much different reading, beginning with his first piece, the anaphoric “I am this poem…” & as another piece was titled “This is a Rant Not a Poem.” While he did separate poems for Travon Martin, for Sandra Bland & for Oscar Grant, on racism & violence in American society, they were each individual pieces, with different approaches to the topic & in different styles, including a hip-hop sonnet sequence & self-consciously “anti-literary” rant. He also read a much quieter love poem, “Orange Love Seat,” & a touching elegy for his father “Lefty Morning Breeze.” 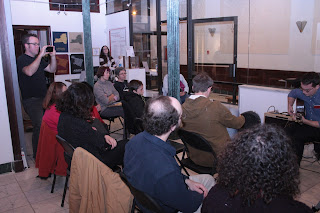 The final performer was musician Nathan Pape who was literally all over his guitar. His single, extended piece ranged from simple, melodic interludes, to volcanic strumming, thumping & massaging the guitar body, to ripping at & un-tuning the strings, getting sounds from almost every part of the instrument.

Yes! is a poetry & performance series so one is never sure what one will see or hear. Look for notices of future events on their FaceBook page.
Posted by DWx at 2:16 PM