This was a book-launch/reading/party held at the home of one of the editors, Albany poet Adam Tedesco. The full title of the 250+ pages collection is Drunk in a Midnight Choir, Volume 1: Welcome to the New Hallelujah & in case you haven’t picked up on the Leonard Cohen quotes already, there was another quote on the title page, “We have tried in our way to be free.” There are over 40 writers of poetry & prose whose work is included in the book. Adam is one of the editors, along with Eirean Bradley, William James, Chillbear Latrique & the apparent editor-in-chief Todd Gleason. 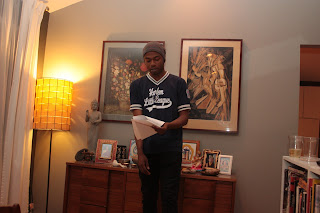 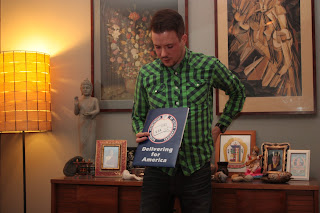 Samson Dikeman began with a poem written today, “Focus,” then on to a funny rant “Music.” Another funny, untitled, piece imagined Adam (the “1st man,” not our host) getting a job at a fruit stand. He read about being a mail-carrier in a piece titled, “Don’t Blame the Messenger,” &, for Ted Berrigan, “Things to Do with a Sonnet.” After a couple others, he finished with another new poem, a sad one about a new widow. 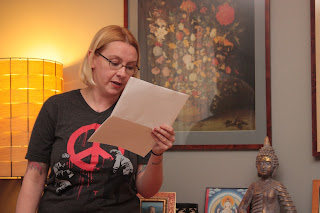 Jacky Kirkpatrick’s first poem, “Modern,” was a morning-after love poem. She went on from there to poems about her family & death, her father, a couple about her mother, & “My Brother Calls My Mother Collect in Heaven."  She also read a poem for poet Bernadette Mayer, “Of Age,” & ended with a piece from from her thesis collection, the working-class anthem “We Were Poor.”


The visiting poets, Eirean Bradley & William James, read as one set, alternating pieces 4 or 5 pieces each. They were both LOUD (especially in the small space of Adam & Lisa’s dining area) Slam performers, usually reciting rather than reading, often with material, style & manner that is more likely found in what are euphemistically called “Comedy Clubs.”
William James read one piece from the book, about his favorite locomotive (I kid you not), “Screaming Thunderbox (Obsolete Engine Blues),” & Eirean Bradley did one performance piece that was “an annotated list of why I moved to Massachusetts,” in which he tossed each page/reason to the floor as he read it. (I retrieved one page, which gives you a good idea of the emotional developmental level of this piece: “Every time you mention Des Moines God punches a fucking puppy.”) They both did a poem on suicide; WJ’s was titled “Letter Addressed to Myself after my 2nd Failed Suicide Attempt” while EB’s was a stand-up routine where he listed clever & “funny” ways of committing suicide. Like I said, they alternated pieces, which is a favorite technique when doing a group reading, but with my eyes closed it would have been difficult, if not impossible, to tell which one was reading, their work & their performances were so similar.

There was no indication in the book, nor from any of the performers, or our host, Adam Tedesco, whether they are planning future collections, but the subtitle “Volume 1” would certainly suggest that they are. Check out their website for more information.
Posted by DWx at 8:46 PM