Unfortunately, my co-host/co-conspirator, Nancy Klepsch, could not be with us today. But many writers & listeners did show up, for a great variety of poetry & prose. 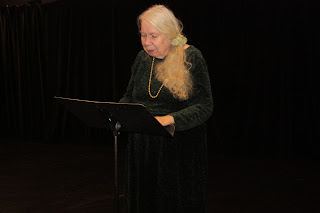 First up for her second time here was Sylvia Barnard, with 2 poems about her neighborhood, the first from her 2012 book of poetry, Trees, “Neighborhood,” the 2nd an untitled work-in-progress in which she invokes the past in the buildings around her. Peggy LeGee read a thank-you to veterans, a piece that talked out breaking the cycles of anger & of other root causes of war. Mike Conner had not been here in about a year, but said he was glad to be back & brought 2 seasonal poems, one about looking ahead to Winter back to Summer “Seasonal Morphing,” & one from late Winter “Fog & Chicken Soup.” Tim Verhaegen read a prose piece on sudden deaths, including that of his much-written-about mother.

Bob Sharkey began with his own descriptive piece, “Tate St.,” about where his grand-parents lived in Maine 100 years ago, then a poem by Elaine Feeney from Galway, Ireland, from a book he picked up at an Irish poetry festival in NYC. Joe Krausman found another of his poems that he had forgotten he had written, “How It Goes,” then one about “Jane the Psychologist” who sees meaning in everything. I read just one poem, a new one, “Naming the Parakeets."  Cathy Abbot read a tribute piece for Veterans’ Day, then a haiku. Howard Kogan’s poem was about what poets need, words (& balls, it seems). Brian Dorn read from his book, From My Poems to Yours (The Live Versions) as he has been doing, on death, “Pain & Poetry,” & “My Impropriety.” 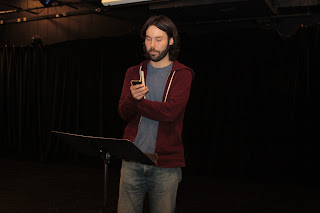 Jamey Stevenson arrived tired from an all-night project & started off with some haiku, then a piece starting with horses, “The Meek.” R.M. Engelhardt made a rare open mic appearance to read from a new book coming out in 2016, 2 poems, “Not My Time” & “The Waiting.” Karen Fabiane read a poem from each of her chapbooks, from Dancing Bears “Oceans Everywhere” & from Seeing Your Again “Begone.” Robert had slipped in late & I added him to the end of the list; he read from his phone “He Walks” & a piece about hiding the past “There Is Something Drab About Fridays,” both filled with rich, descriptive language.

2nd Sunday @ 2 is just what it says, an open mic for poetry & prose held on the 2nd Sunday of each month at 2PM @ the Arts Center of the Capital Region on River St. in Troy — & it’s free. Join us.