This was the last of the season for this series, back again when the (not yet) snow is gone. In honor of our (fool-ish & married) featured readers, Philomena Moriarty & Sam Trumbore, Alan Casline, our host & M/C, announced the theme as “Married Fool,” with a quote from Shakespeare.

Glad that is all behind me, I began the open mic with a brand-new poem, “Joe the Bartender,” & one from my chapbook Poeming the Prompt, “The Birds’ Poem of Thanks.” A.C. Everson had 2 new poems for us, one about “This Guy” using his cellphone at a concert at The Egg, the other about the trees “Autumn 2015.” Joe Krausman entertained us with “Reflections at the End of Summer in the Garden of Good & Evil,” a short piece titled “Call in Love,” & “A Cleric Tends His Flock” for the co-feature Sam Trumbore (who hadn’t yet arrived); then was called back to read the poem again when Sam arrived later. 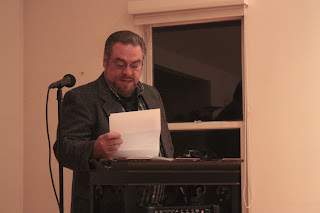 Mike Conner paid tribute to friends who had passed on in “A Bell Rings Gently” & in “Green Team,” then about himself “Still Floating.” Mark W. O’Brien said his first poem, “Enurning,” was about missing his “other half,” then read about a conversation with a cousin (“Hero Sandwich”), then from his 2014 chapbook Lenticular Memories “… how is it you are weary then?” 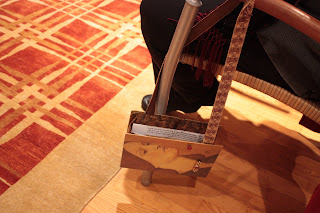 Mimi Moriarty (no relation to half of the featured poets) had the coolest bag of the night; she began with a haibun, “The Underside of Leaves,” then touched on the theme of the night with a piece about Noah (who of course had his wife along on the Ark) “Rainbow, a Reminder.” Brian Dorn read a couple of love poems, both from his book, From My Poems to Yours (The Live Versions), “Suspended in Time” & “Can’t Escape.” I hadn’t see Ann Lapinski here in a while & she read “Practical & Spiritual Advice for Picking Strawberries” (just what the title said). Our Host, Alan Casline, read from the spurious collection The Annals of Perious Frink, the anonymous piece titled “Tales from the Fox Creek Cottage Days” about a thief. 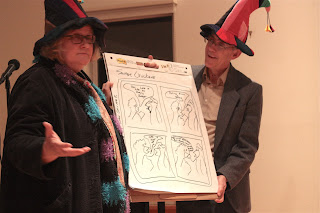 Philomena & Sam began (& ended) their reading with “Savage Chicken Poetry” based on the Savage comic strips, then on to a fast-moving set of alternating pieces, playing off each other’s themes. Sam led off with what he called “Sci-fi Haiku,” then a wonderful relationship poem “Delayed I Love You.” Philomena followed with a couple of her own, “I Only Know Exceptional People…” & “Love’s Compass.” Sam read a piece about an old relationship, “Getting Real,” an excerpt from a sermon. Philomena found inspiration from their son Andrew’s computer games in her poems “Kill Them & Take Their Stuff,” & “They Said There Would be Cake.” Speaking of computers, Sam read “De-Bugging” (what he called “a programmer’s sonnet”), then another sonnet “Music Words Epiphany.” Philomena pondered “On Being Irish” & on great minds (“Starships”). Sam returned to his sermons for a piece in rhyme about the Wheel of Life, then his words to Leonard Cohen’s classic “Hallelujah.” Philomena read 2 poems, “If Poems Were Wishes” & “Benefaction” from her new book My Moon Self: A Spiritual Memoir Through Poetry, ending with more “Savage Chicken Poetry.” The silly pointed fool’s hats seemed to add just the right touch of whimsy to this most delightful reading.

With the help of the gods & seasonal warming we hope to be back in the Spring here at the Pine Hollow Arboretum in Slingerlands, NY for Poets of the Earth, Water, Tree & Sky. See you then — if not before.
Posted by DWx at 2:04 PM