Another festive gathering of poets at the Pine Hollow Arboretum for the featured poet Dianne Sefcik & to read our own work in the open mic. 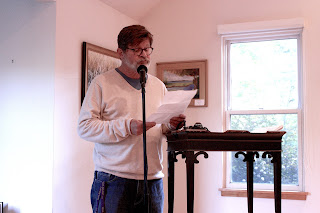 First up was Tom Bonville with a memoir of high school “Summer Nights 1970.” Howard Kogan’s “Elegy for Smitty’s” was a tribute to the now-gone Voorheesville watering hole & an opportunity to recall a similar place, Teddy’s, where he had his first legal drink, then a piece about a reading by Bernadette Mayer in Hudson “T.S.L” Dawn Marar’s poem was about a Civil War soldier’s burial in Saratoga, a work-in-progress with the working title “Citizen Dawn.” Philomena Moriarty said her poem “Finding America” was inspired by a poem by Dianne Sefcik, then an older poem “The Ramifications of Taking My Father Out to a Chinese Restaurant.” Mimi Moriarty (no relation to Philomena) began with a poem from a prompt “My Best Decade” (her first), then the affirmative “Tap Dancing” & “Children’s Chorus.” Bob Sharkey read a poem about finding peace over time “State of Affairs,” then another in his continuing quest for the perfect fortune cookie fortune “Must Have Cost a Fortune.” I read a poem dedicated to Howard Kogan “A Shill at the Fair” then another in the continuing series of poems about “What Makes America Great” this #6.

Paul Amidon read a couple of memoir poems, the first “Old Friends” about a 90-year-old veteran, then a piece about collecting the comics from “Bazooka Joe” gum. Speaking of Joe, Joe Krausman read his laconic “Freak Accident” & a true story “On Being Un-employed in My 40th Year.” Our host at the Arboretum John Abhul often reads philosophical essays, tonight read philosophical poems, “The Majesty of Being,” “Thoughts” (from 2009) & the recent “The Standard.” Mark O’Brien aka Obeeduid began with a piece on the birth of his granddaughter from his Blog, then to one for Michael Czarnecki’s forthcoming anthology of poems about Route 20, & one from Bernadette Mayer’s workshop “Frozen Cookies.” 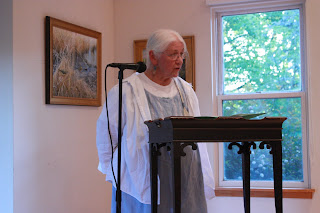 This was Dianne Sefcik’s first featured reading; she has been coming out to the open mics in the last year or so. She began her reading with a poem titled, appropriately enough, “Indigenous,” then her poem from the Rensselaerville Library’s April Poem-a-Day project (more on that later) “Red Ochre.” “Vision Quest” was dedicated to Crazy Horse, then “Birches” that can be found on Mark O’Brien’s Blog Thirty Six Views of Ononta’kahrhon, “Council Fires” & a poem about how our spirits travel “Portal.” She read a poem about the Four Corners Monument, another about “hard-headed hoodoos” from a workshop list of words, & one about “When the Spirits Come Back.” The poem “Journey” was awash in cosmic images while “Bear Two” told of an encounter with a bear in a gravel pit, & she ended with a story, “In the Early World.” Her poems are richly descriptive of the natural world, but also of the spirit world around & within. It is good to have this gentle poetic voice among us.

After a break, the open mic continued with Tim Verhaegen reading a characteristically hysterical story of a recent encounter at a bus stop that brought back memories of parties & sex from the past. Our host Alan Casline read 3 poems about the South-West, the first “Gate Closed” about checking out a spring, another about looking for a poet’s house in Santa Fe, & the last about a clay turtle (the actual object in question passed around to the audience). Peter Bourdreaux read about hero anxiety “Yes No Maybe.” Tom Corrado finished off the open mic with still another in the infinite series of “Screen Dumps,” this #369. 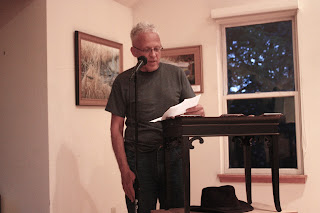 Speaking of Tom Corrado, he had set up, in conjunction with the Rensselaerville Library, the 2017 Poem-a-Day Project so that during April there was a new poem every day from this region’s stellar poets, some of whom were in the room. Tonight he handed out to those of us who had contributed a poem a collection of the complete set of April’s poems printed up by the Library. He said that there were lots of “hits” to the website, hopefully by folks looking to read some poetry; but if I still had a Mom I’d say, “Thanks Mom for going to the website & my poem 5 times a day!”

Poets of Earth, Water, Tree and Sky continues at the Pine Hollow Arboretum, 16 Maple Ave., Slingerlands, NY into November -- usually, but not always, on the 1st Friday of the month.
Posted by DWx at 9:59 AM