I was in the mood for a night at The Low Beat & poetry. Turns out it was a “going-away-party” for Amani O+ who is taking the Summer off to work on Soul Fire Farm in Grafton (not that far away), turning the hosting duties to a couple of other women poets, including Mariah Barber, whose poem “Fuck Butterflies” Amani read to get us going.

In many ways it was rough night for my note-taking, with the names of the open mic poets sometimes lost in the background music, or not clearly said by the rotating string of guest hosts. I did the best I could.

I was first up, reading “John Lees,” a memoir of sorts of my days in the Army that I like to read around Memorial Day. Poetik began with a letter to Donald Trump, then “Grab a Chain” a piece on vulnerability. Then a string of rotating hosts introducing the poets, some of whom seemed to be known to others, but needed to be introduced themselves for folks like me who had no idea who they were. Victorio Reyes did his rousing piece “This is a Rant Not a Poem” parts 1 & 2, then he also had “An Open Letter to the 45th President.” 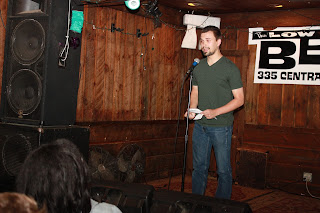 Mariah introduced Andrew who read the provocative “WMB” (i.e., “weapons of mass bondage”) then a piece on being in New Orleans. MzTu was back & read poems from her new book which title I missed, the first “Anger Became My Friend,” then a torrid relationship poem “360 degrees” (the temperature, I think). 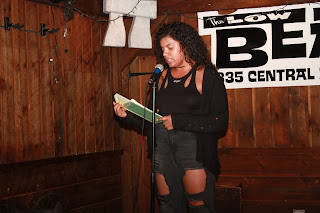 Another poet new to me was Morgan Haywood who read a piece written today “To My Soul” about a shitty day. The next reader (Ashley?) said she was trying out stage names, but I missed that too, began by singing, then read a sad break up poem. Liv McKee, who will be one of the readers in this year’s Poets in the Park (July 22) did a couple of short poems on love, a piece titled “I Always Get What I Want” then a Haiku series for the unborn, & another love poem. 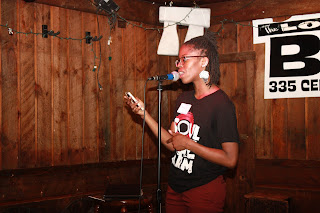 Amani was introduced as the featured poet by Mariah, for a self-indulgent good-bye-but-I’ll-be-back reading, beginning with her signature piece, “Amanita,” about being assimilated & asserting her heritage, done as an audience participation piece. Then on to poems about her cats moving into a new place, about falling in love at a Slam Championship (“He Came With Love”), about Soul Fire Farm “Mother Nature Turned Down for What,” & a piece titled “Patience.” In between she talked about her time here at Nitty Gritty Slam, & about her visit to Cuba. Later she came back to do more poems, but in between Mariah did some “commercial break poems” written to the sound of rain on the roof, & about her family.