“This Donald anon leet fle a fart.
As greet as it had been a thonder-dent…”
— from “The Miller’s Tale“ by Geoffrey Chaucer

When he farts in his limo or private corporate jet the farts get circulated until completely absorbed by the other passengers, his driver, his pilot

His children, Ivanka, Donald Jr., Eric, even Tiffany & Baron have been hearing his farts for years
& like all children they got used to them, & now ignore his farts.

Ivana left him because when he farted he didn’t say “excuse me,” Marla because his farts were loud, violent
but Melania rather enjoys them & likes to say she doesn’t fart except in the bathroom & when she does they are “melodious”
but then she likes to copy what other people say. 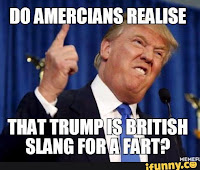 Donald Trump says that he wants Muslims to wear a badge, this stinks even worse than his farts.

When Donald Trump becomes President it would be in the World’s best interest to make sure his diet avoids beans, beef, &, of course, beer
Because when Donald Trump farts, Vladimir Putin farts too

But when Donald Trump farts in the White House the whole World does not have to listen & all Americans should be buying anti-fascist air fresheners.