This long-awaited event at the Restaurant Navona had been delayed due to the end-of-the-year holidays but here we were to listen to & to interrogate long-time Albany poet, Don Levy. I had first met Don at the monthly open mic at the QE2 (not yet settled in to the last Monday slot) in May, 1988. My notes indicate that he read after me & before Karl Gluck, but the notes don’t indicate what he read.

But tonight he included some older poems from earlier chapbooks, “He Wasn’t Always Such a Reluctant Astronaut” (from How Small Was My Big Eden) & a poem about the Wizard of Oz, “Begone Before Someone Drops a House on You” (from Super Queer Poet Saves the Day). Then on to a cluster of poems written in the last year, beginning with “Divers” about watching “Wide World of Sports” with his Dad, then to the even more direct “2 Men Kissing,” & “To the Victims of the Pulse Shooting."  Don spends a lot of time on social media & wrote about the “Death of a Digital Friend.” On to more directly political pieces, “Mike Pence Goes to Hamilton,” & a response to a FaceBook post, “Straight Pride Day is Every Day.” He ended with a couple pieces read from his phone, the meditative “Hopper Motel” & a poem that looked back to the poetry days of the QE2 “I’m a FuckingPoet!” 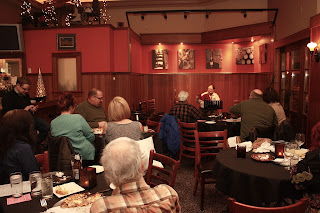 As good as the reading was, his interview by Thom Francis, el presidente of AlbanyPoets.com, was even more fun. Thom asked, as he traditionally does, about how Don became a poet & Don explained that he started writing poet after high school when he was a student at HVCC. He went on to talk about his introduction to poetry open mics at the QE2, even reciting his notorious “Condom Poem.” He also gave a brief history of the reading series that he started at the Albany Art Gallery on Jefferson St., run by art impresario Bill Lemily, in November of 1989, & how it morphed thru the Fuzz Box & Lemily’s other gallery on Washington Ave., to the series at the Pride Center.

About his being a host Don said, “I’m a jukebox & I give people dimes to put in the jukebox."  Mary Panza, who had been the subject of one of these Albany Poets Presents events this past year, amusingly asked Don about the time he “came out” at the QE2 & remarked about what a ho-hum, un-Earth-shaking event that it had been. It’s always fun to have a conversation with Don Levy.

This series is usually held every other month, on the even-numbered months, on the third Wednesday, at the Restaurant Navona on New Scotland Ave., in Albany, NY. Check out AlbanyPoets.com for more information.
Posted by DWx at 7:38 PM