This was the 1st poetry event of the year for me & it was a great omen that it was a packed house with great words from near & far. Amani & Jayton served as hosts for the open mic; the Slam is held on the 3rd Tuesday. There was also food being served & game tables set up, even a confused guy in a plaid shirt & rain jacket who wandered in looking for comedy night. Amani set the tone with a reading of the poem “Ode to Existence” by former Albany poet Daniel Summerhill.

Avery was the first up with a performance of his piece based on the Heart Sutra, “What is that Subtle Background Hum?” On a slightly different sound, I read the latest version of “When Donald Trump Farts.” Ainsley performed from her smart phone the anaphoric “Live is like…” 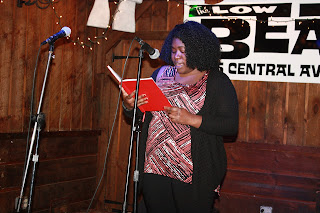 Poetik, who was running one of the gaming tables, read an instructional (& self-affirmation) piece “To the Next Person Who Will Be the Love of My Life.” Apparently Elizag had gotten a traffic ticket because her piece was “To the Philmont Traffic Court.” D. Colin read 2 poems for Haiti’s Independence Day (January 1), “Souvenir” from her book Dreaming in Kreyol (Empress Bohemia Press, 2015), & a piece beginning “We Are Beyond This…,” both celebrating Haiti’s history & culture. 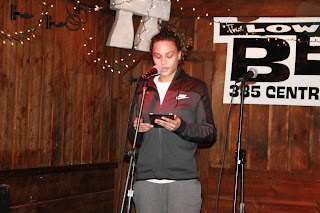 “Slim” said this was her first time reading & read a 3-part poem on the different stages of a relationship. Gabriel said he had no poems but did a short stand-up with jokes & stories about Xmas with his family.  Jayton, with Amani as back-up singer, did a free-style on audience-provided words “chocolate” & “magic.” Poetess did a dual piece dedicated to her parents. Amanda B. read 2 love poems, the first titled “In Dreams,” the second an early, untitled piece not read out before. 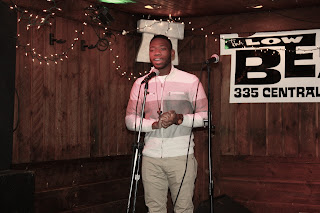 Ronnie was visiting from San Diego & performed a couple of slam pieces, “Daddy Issues” & “Identity.” Sakea was with Ronnie & also did pieces from memory, one that posed the question “I am Afra-Latina…what are you?” the other addressed to guys who hit on her, telling them “my face is not an invitation…” Sweetz read from her phone what she called an “old, untitled, romantic” piece.

It is great to see that Amani & Jayton are not only keeping the Nitty Gritty Slam going, but drawing in a good, diverse audience. It’s at The Low Beat on Central Ave., Albany, NY, 7:30PM each 1st & 3rd Tuesday — catch it.
Posted by DWx at 5:13 PM