We all agreed that it was a good thing to gather for a night of poetry on the evening of the morning after the night before, away from talking heads & charts & numbers & maps. Our host Catherine Norr broke out in song to get us into the open mic. Richard Jerrin began with a poem written in the cold (with his gloves on?) one of love & longing, then a longer fragmented piece titled “He’s New.” 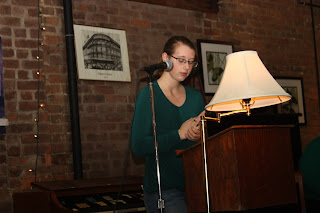 One of the group of young writers who frequently gather at the long table to workshop & socialize, Brittany Moesbe read a piece of short prose fiction “Envelope” about reluctance to open a letter from a past love. Carol Jewell is the master of the pantoum & read 2, “The Ox Herder,” & “Cento Pantoum #2” an impressive tour-de-force of repeating lines from a variety of poets (& a variation on the form she has staked out as her own). Ginny Folger addressed what many of wanted to do this morning “Sleeping in Late of a Morning.”

Another of the young students, Shayla Clark, read 2 pieces having to do with identity & defining herself as an artist, “Artist’s Rivalry” & “Ethnic.” Rocko read a short piece on misunderstanding “Whatever Was Meant.” Brian Dorn responded with a poem (in rhyme, of course) about uncertainties “Whatever Will Be.” 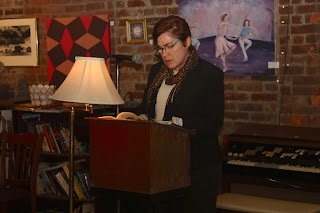 Melody Davis was the night’s featured poet. She began with a series of haiku from her collaboration with visual artist Harold Lohner, “One Ground Beetle,” currently at The Word & Image Gallery” in Treadwell, NY, then on to poems from her 2 books. From The Center of Distance (Nightshade Press) she read a poem of New Orleans, “The Camellia Grill, & from Brooklyn “Persistance.” From Holding the Curve (Broadstone) she read another Brooklyn poem, the grim “Casualty,” then the much more hopeful “Why I Teach Children Poetry,” a poem about watching CSI with her daughter, and a poem filled with math images “The Trigonometry of Children.” “Sugar” is a self-portrait “crown of sonnets” filled with the images of sweets, taking her through the ages 9 to 13, then she ended appropriately enough for this night-after with the last poem in the book, “Blessing.”

Catherine Norr returned us to the open mic after a break with poems from her book from Finishing Line Press Return to Ground, one of my favorites, “Mississippi Riverside Chat” then the title poem, drawn from a dream. Carol Graser read from her book The Wild Twist of Their Stems (FootHills Publishing) the chant-like “I Give You Birth.” Don Levy is quick on the draw & already has a poem about the elections “The Thing from The Poseidon Adventure is Called the Morning After.” I also read a post-election poem, but one written many elections back, “The Elect Shun Mourning & Celebrate.” 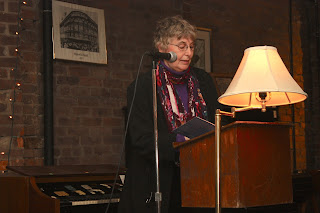 Jackie Craven read a piece of short prose, a poetic bread recipe from “Mrs. Knickerbokcer” from her new book of short fiction from Omnidawn Publishing Our Lives Became Unmanageable.  Susan Kress read “on the theme of hopeless dread”, the ghostly “Open House.” Bill Notro said he usually writes songs, then read a dark murder story in rhyme that hadn’t been set to music, then another rhyme, just written now, another “morning after piece” of a more aggressive orientation. Oh well.

This series is in the Stockade Section of Schenectady at Arthur’s Market each 2nd Wednesday at 7:30PM, an open mic & usually a featured poet. Free.