I was featured at this weekly open mic out in Westfield, MA. Lori Desrosier had invited me to read back when she ran a series at Jester's up the street. But now she is co-hosting here instead, with Eli Boenziger. 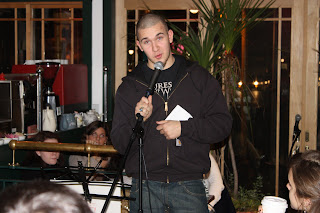 A cute little cafe with excellent casual food & a selection of beers & wines. There was quite a crowd because Leah Nielsen had brought her poetry class from Westfield State College -- the second open mic in a week I had attended where the profs had helped to pack the audience with their students. The open mic list had to be adjusted slightly for poets with "swear words" to read later due to a family with young girls having dinner. They left in the middle of my reading -- I didn't need to use "swear words" to drive them out.

Steve Ala, a local regular, did funny narrative pieces in his father's accent. Student David Walker protested that he was not from the ghetto, while Brittany Costa read a poem about alcoholism & violent love. A recent Smith College graduate, Em Jollie read "Ceremony for Completing a Poetry Reading" by Chrystos, a poet from Bainbridge Island, Washington, checking out (but I wonder what Em's poetry is like?). Co-host & MC for the evening, Eli Boenziger did punchy rhyming poems in between once in a while, including one to his son. Other student readers were Jaime Cocomazzi & Derek Strahan. 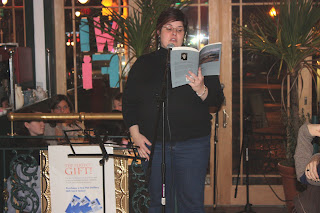 Their teacher, Leah Nielsen read a litany, a spell against another sad poem -- wish I had the name of her chapbook.
I was the featured poet, & introduced myself with "Autobiography" & "Where Were the Professors?" (which of course was not directed at Ms. Nielsen). "Phone Sex" showed I could "watch my language" & still raise an interesting topic for dinner conversation with 7-year olds, who were gone by the time I did "Patriotism". The students were familiar with Slams so I gave them my take with "Slam Poem" (hey, I don't just go after pompous academics). Also on the theme of poetry/poets were "The Night Sky" & "Poetry Prompt." Back to the political I read "Baghdad/Albany," challenging the students to write their own home-town version, then "A Pain in the Neck." "Ordering Lunch" & "Starting the Wine" (to prove I'm not a total cynic) brought it all back home.

Back to the open mic, Kim Dawson did rhymes on music in the kitchen. TJ Matthews's poem was about the time he ate peanuts & confronted his anaphalactic skin blotches. "The Tip Top" was Stephanie Januszewski's poem about dancing before an audience. Caitlin Norton's "Error on Page" contrasted "perfect" looks with the style of a slut, but in computer jargon. Danielle Rice travelled the world in her poem but would rather be home. Brianna Conchieri read a section from a short story. 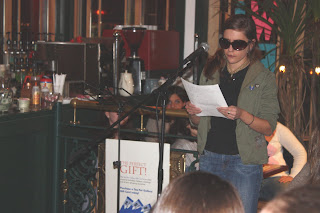 Ari Hutchins was in costume (to foil Homeland Security) to read "Fuck You America." Open mic regular R.S. Herrick took another direction with "Hold On to Hope" & "The Juvenile Home." Tommy Twilight did a walking meditation on the butterfly "Wing" theory of chaos. And Lisa did a couple of funny Thanksgiving rhymes, one where preparing the turkey was like sex & the other where it explodes when stuffed with popcorn (hope your Thanksgiving was as much fun but less messy).

Even though the students left, the sign-up sheet done, & the feature finished, Steve Ala, Eli, & Lisa each traded a few more tossed off poems as the folks tried to close up the cafe for the night.

Hi Dan
Thanks for your visit to my blog. You're doing some interesting things. I'll add your blog to my links.