It was the annual "Airing of Grievances", with our host el presidente Thom Francis keeping a mental sign-up list. 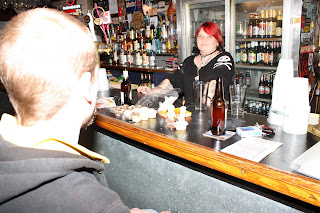 I "signed up" first & did a trio of classic grievance poems, which, happy to say, are now only bothersome memories & late-night fantasies: "Heartbreaker," "I'm Tired of Waiting" (& I stopped long ago), & the fleeting "Love & Hate" (which I think I once posted on MySpace). Moses Kash III hung out with us at the bar on this night, read the poem he once sent to Hillary Rodham Clinton, "Black Tragedy: Children of the Rainbow," & his take on race wars as reflected in 2 roommates, one white, one black, "The Room Mate".

R.M. Engelhardt made a rare appearance with versions of the poems he has been writing for years, one counseling not to wait on false hope, false love, etc., the other an email rant. Oh we poets, preserving our pain in words. As does the ever-exciting Shannon Shoemaker with three poems: "Grown Cold," "Breathe in the Foul Stench of Humanity" (not sure if that is the title or first line), & what she called the latest installment in her involvement with a woman she shouldn't be -- oh well, don't we all?

Mary Panza hasn't ridden her self-righteous social commentary horse in a while & it was bracing to hear it once again, the title says it all: "The Tattooed Crowd at Day Care." Adam Hoyt has been here before & he read four of his short rhymes, "Catalyst," the prosy ponderings of "Epiphany," "The Song in my Heart," & "Laughter." 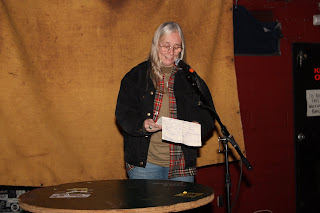 And the surprise of the night was a poem by open-mic lurker Sue Cerniglia, "The Double-Header," a "just written" piece on having a colonoscopy & an endoscopy at the same time. More than I can imagine. Sue shows up at a lot of these events & I've only seen her on stage with her grand-daughter, never heard her read a piece she wrote before tonight.

Now we all know that el presidente has had more than his share of grievances this past year, but he seemed to exorcise them vicariously through our gripes. Instead he celebrated his 31st Birthday at the bar with cupcakes, candles & beer. Happy Birthday, Thom!

Every 1st Tuesday at Valentines on New Scotland Ave., Albany, NY
Posted by DWx at 2:02 PM