Dennis Sullivan introduced the afternoon then introduced the other host, Edie Abrams, who did the individual introductions of the poets, which began with #2 on the list who was me. I read a couple on impermanence/eternity, that I've made some recent, minor revisions, to: "Dancing on the Mandala," & "The Eternal Moment" (it's nice to try them out). Edie Abrams contemplated her big toe in "Poetic Subjects" (it's not every subject you can cover in nail polish).

Dennis Sullivan read a 6-parter on family, memories, the nature of it all, "The Holiday." Mimi Moriarty said it was her father's birthday & read about watching "Home Movies" after his funeral, then about the "Beach Cottage" he built; also, a recent poem, "Ice Storm" -- but I haven't gotten around to writing mine yet.

TimV blamed his poem "In the House" (describing his boyhood home) on Dennis asking him about what was in his boyhood room; then he read a poem by Robert Graves that was written in the same style of simple, declarative sentences as Tim's poems, then one by Marianne Moore -- more TimV, more TimV. Mike Burke, who is one of the triumvirate of hosts, read an 18-word poem, "Done," then an early portrait of a friend's father, "Mr. Ransom."

You can find the link to Therese Broderick's Blog on Ekphrastic poetry at the bottom of this webpage, & her poem "Nighthawks" was about the famous Edward Hopper painting. Joyce Schrieber brought along her own painting, not to illustrate but somehow to elucidate her poem, "Monologue for the Crone."

Larry Rapant (who had been the featured poet here in October, with Tom Corrado on bass) began pondering his philosophy with "Cobwebs all too Cobwebs," then paid tribute to the featured poet with random lines pulled from his poems, & ended with his own one sentence poem, "The Dogs in the Trees." It reminded me of a book by Robert Bly, Leaping Poetry, but with more emphasis on the leaping. 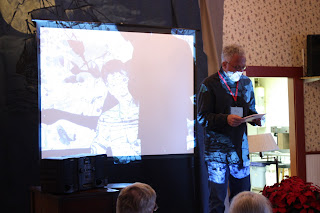 The featured poet, Tom Corrado, gave a full-blown multi-media presentation, with slides, taped reading, & even his companion string-bass. He began with projected images washing over him, stating "the theme is you." His reference was really to the 2nd-person pronoun, not to his audience, although you (!) may take that as you(!!) may. His model/guide is John Ashbery, with humor & the odd juxtaposition, like the poetry of French surrealists, as the method, as in his poem "Pity the Poor Anchovies," or "Immense Door Knobs Populate Your Dreams," where the titles can give you an idea of where he took us without quoting any lines. Speaking of which, did he really mention "gandy dancers" twice (in a poem on facades)? In "The Barometer of Relationships" Tom mentioned "dental floss," which Rapant had also earlier -- or was Larry quoting this poem? Either way, I have never before been at a poetry reading where dental floss was mentioned, twice no less! HIs best exploration of "you" was in "Mapping the Rest of the Journey" with it's dissertation on "you" & "it." His ending was an entertaining Ashbery tribute/immitation, "On the Road, They Cup Their Hands" in which the poet accompanied his taped reading of the 100-line poem on the string bass with video images projected on & over & behind him.