The Poetry of Oklahoma 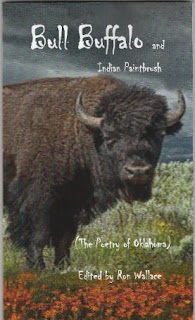 The Scissortail Creative Writing Festival happens each year at East Central University in Ada, OK. I have attended every-other year or so since 2011. This year’s festival, scheduled for April 2 thru 4, was, of course, cancelled. However, just in time, a book arrived in the mail, Bull Buffalo and Indian Paintbrush, The Poetry of Oklahoma, edited by Oklahoma poet Ron Wallace of Durant, OK.

By my rough count, nearly half of the poets in the anthology I have see & heard at Scissortail at one time or another. There are some names with national reputations, such as our current Poet Laureate Joy Harjo, the novelist Louis L’Amour, N. Scott Momaday & Rilla Askew. & many I count proudly as my friends, including Ken Hada the director of the festival, Jeanetta Calhoun Mish who 1st introduced me to Oklahoma in 2010 when Charlie Rossiter & I made a trip to Albany, OK, Jim Spurr (sadly no longer with us), feisty Dorothy Alexander, Rilla Askew, former New Yorker Paul Austin, & the editor himself Yankee fan Ron Wallace. Others whose books I have on my shelf of Oklahoma writers, or with whom I’ve shared dinner & drinks & conversation.

Jeanetta Calhoun Mish, Oklahoma Poet Laureate 2017 - 2019, once lived in Albany, where her son Michael was born, & on visits back to the East she has stayed at “The Poetry Motel.” It was Jeanetta who made it possible for Charlie & I to visit Oklahoma & even be part of the Oklahoma Labor Fest when we were there. Ken Hada has also made trips to the East & also been a guest at “The Poetry Motel.”  Both have read at poetry venues in the area, such as at Caffè Lena in Saratoga Springs.

It’s a marvelous group of writers & I look forward to seeing them again, maybe next year. But this anthology brought these, & other writers I haven’t met (yet) into my home in Albany, NY.

You can order Bull Buffalo and Indian Paintbrush directly from Ron at his website www.ronwallace.com — tell him Dan Wilcox sent you.

I missed this earlier, Dan, but thanks a ton for the mention. I have plenty of copies. Covid has slowed opportunities to sell. Check my website: RonWallacePoetry.com