Troy on Monday nights means Poetic Vibe at the Troy Kitchen, with the poetic dynamo D. Colin as host. Of course, I got there early & filled in the #1 slot to what was eventually a long list.

[Note: at the end of readings I try to consult, or photograph, the sign-up sheet to verify the names of the poets who read, names that sometimes are obliterated aurally by applause, or are not spelled the way I think I heard it, but at the end of the night, the list could not be found, so apologies to poets whose names I’ve misspelled in the following account — corrections are appreciated & will be made.]

I was first (always get this one correct) with a poem from last year “Red Boots,” then one from my recent trip to Gloucester “The Helicopters of Peace.” 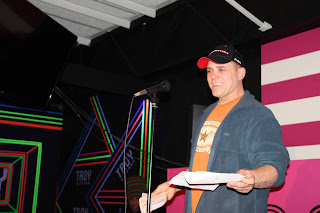 Dave Treacy read a poem written this afternoon “Sam’s Home Cooking,” then a piece in rhyme about hanging out on his deck. Hannah Rose, a regular here, likes to sing, tonight with a piece about black love between woman, another about love written at a stay at Four Winds. Marie Kathleen began reading from her phone “Jazz in Real Time,” then from paper a short “Ocean Breeze."  Joshua RA Dundas is known for shouting, stomping across the stage & for taking his shirt off, all of which he did tonight, largely incoherent.

Asia talked about Eve Ensler’s The Vagina Monologues, how she had auditioned for the show when she was a 9-year old, then did “Cunt” from the play, & one of her own, I think, a re-definition of the term “slut.” The poet known as “Slay the Dragon” read “Vicious Ending,” a dramatic monologue of the last days of Sid Vicious, from the punk band The Sex Pistols, that a more personal piece about having his heart broken at age 16.

Truth started with an introduction beginning “I am right where I supposed to be…” encouraging the audience to snap along with his hip-hop rhyme, then a piece perhaps titled “The Grass is Greener,” with a some shouting at the beginning. One Poetic Vibe’s piece was an argument on the theme “how many times can you re-write a poem?” DJ Air Alert was another performer in the hip-hop style his pieces titled “Alpha Bitch” & “I Can Sue” (about his prison experience). 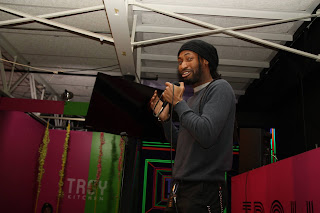 I’m not sure but I think the next poet was introduced as “P.” who said he was doing “a couple of bars from a book of rhymes,” which they were, one a love poem. Sean/Shawn (not sure which spelling) said he was a musician, did a couple of short poems, one a breakup poem. Another poet’s whose name I missed completely had an argument poem, after a breakup.

The next reader announced was “Donfons” (AKA Alfonso Rodriquez) who gave up his slot to make space for Amani O+ (who wasn’t on the list) & practiced a piece she was planning to do at the Women of the World Poetry Slam in Dallas, Texas this weekend, the piece addressed “to future monogamous boyfriends” was about what possession means. Liv, also on her way to WOWPS did a piece on body image beginning “The handyman called me skinny…” The next poet was either D or V, & she did a couple pieces that were basically self-help lectures. Then Donfons was back for his own slot with what he called “a tune” another in the hip-hop style. 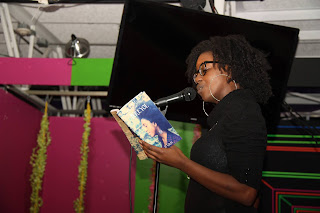 I didn’t know if there was to be a featured poet tonight & it turns out to my delight to be our host D. Colin, who also was on her way to Dallas for the WOWPS, & I think used the opportunity to practice. But first she read a found poem what she calls the “take-away” from the night’s open mic, as she does each week, lines, phrases that struck her from each of the readers — so you know this host is paying attention. She began with singing lyrics in Kreyol, then the piece “The girl dream” (from Said the Swing to the Hoop, Empress Bohemia Books, 2019) for her mother, who had been told as a child that a girl is supposed to be a boy’s dream, not dream like one. Then from Dreaming in Kreyol (Empress Bohemia Press, 2019) “Dear Anacia.” Then on to “Red Leaf Tree in Summer” &  more singing, explaining that she has been experimenting with music. Back to Said the Swing to the Hoop she performed “American on our breath” & “Broke just like that” spinning off a tune by Nina Simone, then ended with the defiant “for every Black Woman who has been called Angry.” Danielle’s poems stand in stark contrast to the locked-in-a-box hip-hop rhymes & rhythms often heard here & at other open mics, borrowed from some high-paid entertainment star, while her rhythms, her phrasing, even when she rhymes, are her own, musical, flowing from her life & experience. There is a lot to learn from this original, energetic, & even humorous voice, a poetry dynamo right here.

Poetic Vibe is each Monday at Troy Kitchen on Congress St. in Troy, NY at 7:30PM, & generally poetry events are well under the 50 person limit for mass gatherings in this Age of Coronavirus, but each venue is different — check social media & calendars of poetry events for up-to-date information — but in the meantime, keep writing that perfect poem.
Posted by DWx at 7:30 PM