Back at the Social Justice Center, tonight featuring the North Country poet Stuart Bartow. Still catching up on 2017 Dead Poets, tonight’s Muse was Tom Raworth (1938 - 2017), I read his funny poem, appropriately enough “Envoi.” Then on to a bit of the open mic.

First up was Alan Catlin a semi-Halloween poem from his new book of poems, Blue Velvet (Slipstream 2017) loosely based on movies, “The Thing.” Joe Krausman didn’t read his own poem, instead read a humorous poem by the recently-gone Richard Wilbur “Museum Piece.” Richard Jerin is a regular here & tonight read a long poem which he said was in the spirit of Halloween with moonlight & allusions to death “Time Is But Once.” Carol H. Jewell returned here to read a pantoum (of course) “Appetite” complete with cats. Barbara Kaiser was glad to back in front of the mic & read a poem of loss & moving on “Michael’s New Wife.” 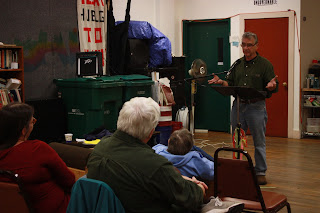 Stuart Bartow was tonight’s featured poet & he began with a poem written this Summer, inspired by a coffee shop door, & channeling William Blake & Ossian, then on to a “sort of political poem,” the metaphorical “Fable.” He said that most of his poems were in a “loose sonnet form” & they clearly were inspired by the mundane & everyday, such as “Midnight at the 24-Hour Laundromat Corinth, NY” & “On the Porch Roof after a Snow Storm” (thinking of the Chinese). The natural world is often his inspiration as well, as in “Green Bottle” which he said was one of its many versions, one of many true stories he made up, such as “Lust” or love, or is it only words?  “Calling the Muse” contrasted poetry v. the real world & incidentally gave out her phone number. “Clouds” made him think of invading Vikings, “Often” considered Shakespeare’s sonnets & birds fucking. The poem “Sonnet” had him pondering the pattern of mathematical formulas on the blackboard, then “fixed” it in another poem titled “Blackboard.” He concluded with “Green Midnight” starting with the idea that the ancient Greeks had no word for “blue.” A most relaxed, conversational reading.

After the break & book sales I read a poem for the season, “Baseball in Palestine,” combining anti-war sentiments with baseball. 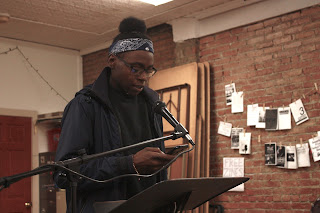 A new face & voice tonight was Janiece Spence who found us by a Google search, read a long, introspective piece “Transforming/Womanhood 1.0.” Bob Sharkey’s poem “Taken” starts with a quote from poet Ocean Vuong & a ride on the subway & a might-have-been. Sally Rhoades read a painful poem about the recent shooting in Las Vegas, “Innocence Lost.” In a recent Blog I commented upon the next reader, Betty Zerbst’s, habit of signing up at the bottom of the list, & tonight she cleared that up by explaining that when she was a very young girl she wanted to be 10 years old & 10 is her favorite number; her poem was about the passage of time “Marching By.”

There is a featured reader & an open mic each third Thursday of the month at the Social Justice Center, 33 Central Ave., Albany, NY, 7:30PM — your generous donation helps support poetry, pays the featured reader & supports the work of the SJC.
Posted by DWx at 4:12 PM