I was glad I could get to this night’s reading & open mic, after missing the last couple, to hear one of my favorite poets, Annie Christain, & gave a ride to my poetry buddy, Don Levy. We had heard that the historic building had been sold, but we found out tonight that the owner of the business, long-time supporter of the music & spoken word arts, Richard Genest had a lease with lime left, so this 2nd Wednesday series will continue, for now. Tonight’s host was local poet Jackie Craven, who didn't spell out any rules, but most poets read only 1 poem, & those who did more were brief anyway. 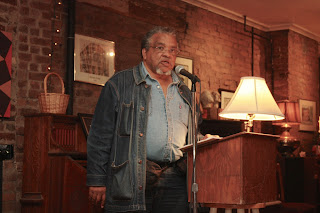 First up was Phil Williamson with what he called a “poem for our time” & the man of the time, Trump, a good political rant. Brian Dorn was timely with baseball history of the area in rhyme, “Dog Days of Summer.” Alan Catlin read one of the movie poems from his new book, Blue Velvet, the Slipstream 30th Annual Poetry Chapbook Competition winner, “The Mind Parasites.” Ginny Folger’s poem “Traveling with Friends” was about the familiar mutual problems we/they endure when traveling with others. Carol Graser read a poem of made up words (I’m guessing from a Bernadette Mayer workshop) “I Have No Words.” 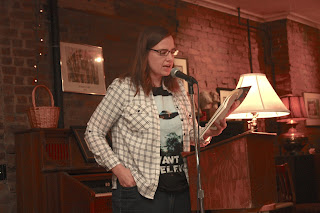 I admit to being fascinated by the poetry of Annie Christain & have been to many of her readings, including having her as a feature at my Third Thursday Poetry Night at the Social Justice Center in Albany. Tonight she read exclusively from her 2016 collection Tall As You Are Tall Between Them (C&R Press), most of the poems I have heard her read previously. But that is a good thing, increasing my understanding of what she is doing in her poems, & tonight she went a long way getting the audience into the poems by explaining that what she read were persona poems (i.e., not the poet speaking), & explaining the genesis & background of the poems, a number growing out of her experience living in China. What she read were “The Sect Which Pulls the Sinews: I’ve seen You Handle Cocoons,” “We Must Kill All Rats Before We Can Kill Your Rats,” “I Took to Walking Down the Middle of Highways to Avoid Getting Shot,” “Pretending to Go and Come from Heaven by Fire” (from a workshop exercise), “MK-Ultra 2 (Montauk): Return Me to Houyhnhnms,” “A Maple Gets Red.” I’ll go to her next reading if I can.

After a break Susan Carol Jewell read a linked haiku & sonnet, each titled separately. I read my take on the Great American Eclipse “Spathe is the Plathe.”   Don Levy read his meditation on the history of “coming out,” a conversation between a young & an old gay man “Louis & Percy.” Scott Morehouse reacted to Don’s poem by saying, “I came out in 1976 but there was no place to go;” he read, or rather performed, “You’ve Got Mail” & “A Brief History of Telecommunication …” Of course Betty Zerbst was way down the sign-up sheet, & she read 2 short rhyming poems, “Everyday People” & “Hard to Let Go.” Malcolm Willison was more ethereal with “Moon Lost.” Jackie Craven read a poem similar to Carol’s & acknowledged that it was written for Bernadette’s workshop, “In Which I Try to Leave My Husband but Cannot Find the Words.”

So the good news is that this open mic will continue on the 2nd Wednesday of each month at Arthur’s Market, 35 North Ferry, Schenectady, NY, 7:30PM, for the next year of so — the bad news we got last November.
Posted by DWx at 11:06 AM

I'm the feature next month.

Just to let you know, Dan, that I am not related to Susan Carol Jewell.

Signed, the Princess of Pantoums