Tonight, the towering figure of Jon Drucker made an historic return to the Albany poetry scene where he had made his mark 20 years ago as poet, performer, publisher (The Greenhell Gazette), & candidate for Mayor. First, some dinner, drinks, & little open mic, with our host Mary Panza.

I was first up to read a new poem-tribute to Don Levy’s series Live from the Living Room “Should I Stay or Should I Go?” then, because it mentions Jon, the historic poem “Where Were the Professors?” 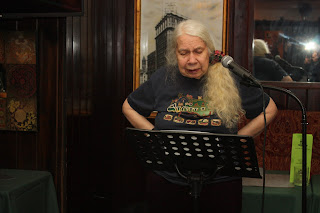 Sylvia Barnard, wearing a souvenir teeshirt from Sicily in honor of Mary Panza, read her poem “Guernica” now with a revised ending, & a new (1st draft) poem “Anna” about the only female prophet mentioned in the Bible. Ian Macks, enjoying the antics from the side of the room, read what he said as a “semi-happy” poem “2 Years Later,” then the more grim “Thursday Third Degree Burns” about the sadness & futility of speed dating. Tess Lecuyer had been going through some old folders & found one with poems from a class on formal poetry she had taught, & read 2 (by someone else), a Star Trek pantoum, & “A Ballade for Tess.” Don Levy read his memoir piece “Prose Poem for Karl Gluck,” then a new poem based on a photo that has been making the rounds on Facebook of an old lady giving the Nazi salute at a Trump rally, “Nazi Soccer Grandmother.” 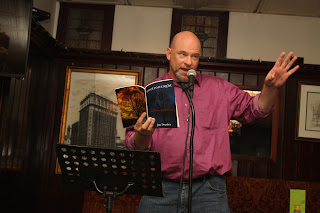 Jon Drucker commented as he started his reading that he hasn’t read in Albany in 20 years, then paid tribute to many of this town's gone poets. He has a new book of poems Oneironaught: Collected/Selected/Rejected Poems & read mostly from that, beginning with “Train Wreck,” an unflattering portrait of a drunk woman, then the more pleasant narrative, “Pablo,” about a conversation with Pablo Neruda (which Jon said was the only poem in the book that has been published previously). Then on to “Unmade” (the bed), “We Shared a Whiskey,” & “Rule” combining megalomania & laundry. Then a couple poems for his next collection, one about leaves, the other about relationships as math, as changes, “Nowhere Mathematics.” He ended by returning to the book for “Rollercoaster.” Good to hear Jon’s work again. Oneironaught is available as a Kindle & in print format.

Annie Sauter brought her own clip-on light to help her read what she described as 2 Colorado “trailer park poems” (I certainly know about “trailer park poems”!), “Zero Vector” & “Feeding the Cats.” Karen Fabiane, who is a future-feature here (& elsewhere) read a poem about the dead & the living “Voice Under a Cold Moon,” then a poem from the recent “Pocket Poets” style anthology 2 “This Hardship of Loving.” Shannon Shoemaker read 2 brief poems, the new “Unrequited” & the strutting & ranting “Poem for the Open Mic.” Adam Tedesco can be quite grim as he was again with his 2 poems tonight, with “The Third Man” a take on moralistic/behavioral children’s books, & the equally grim “Sanctions.” 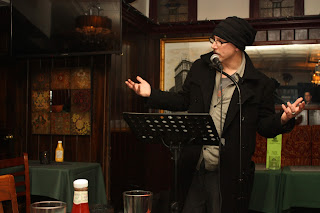 Another throw-back to the early years of the Albany poetry scene, R.M. Englehardt, ended the night with 2 of his classic poems from the era, “Jesus Saves” (set in a bar, of course), & a vehicle for grand pronouncements, “Interview with The Poet Isolationist.” A fitting throw-back to those (I think?) thrilling days of yesteryear…

The rest of the time Poets Speak Loud! happens on the last Monday of the month in the backroom of McGeary’s on Clinton Square in Albany, NY, about 7:30/8:00PM, check AlbanyPoets.com for complete information.
Posted by DWx at 7:50 PM