Because there was a theater production in the Black Box Theater downstairs where we usually meet at the Arts Center in Troy, we were upstairs in one of the studio rooms. It seems like everyone found us because there was a whopping 17(!) folks signed up to read. Nancy Klepsch & I were the co-hosts, as per usual.

Sylvia Barnard signed up first, “so I can relax & listen to the other poets” she said, & read 2 poems from her travels in Europe, “Guernica” (on the Picasso painting, now back in Spain), & “Grandchester, to Rupert Brooke & Sylvia Plath.” Peggy LeGee read a seasonal piece about Spring as a time of rebirth of plants & Nature, herself included. 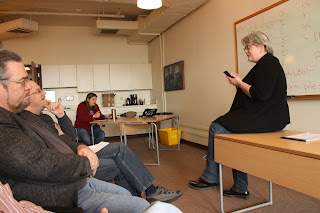 Kate Laity read what she described as “a fairy tale,” written in 2014, long before the recent upheaval at the College of St. Rose, “The Sage, the Scholar & the Administrator.” Cathy Abbott paid tribute to the late Bob Foltin with a brief memoir titled “Leprechaun,” then a piece inspired by reading Patti Smith’s memoirs, paying tribute to the poetry scene here. Howard Kogan read a poem based upon Flaubert’s novel  Madame Bovary “To Gustave with Gratitude.” Mike Conner is prone to read seasonal poems, as he did with “Late Winter Rain,” then the descriptive morning poem “Coffee Tea & Me.” Bob Sharkey, who is a regular here (& at other open mics in the area) read a piece titled “Power of Words” based on the poems submitted for a contest he coordinated & financed, the Stephen A. DiBiase Poetry Contest, then summarized the results, particularly since a number of finalists & honorable mentions, & a Special Founder’s Award winner, Karen Fabiane, were in the audience; complete results are listed at the end of this Blog. 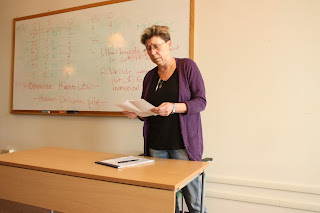 Jil Hanifan made a rare — & welcome — appearance & read 2 poems from a new series of post-apocalyptic poems set in Albany, “Yard Sale in Abaddon,” & “Abaddon #18" (as in the Delaware Ave. bus). Matt Ryan came back to read 2 poems in rhyme, one about the end of a relationship “Without Her Silence” & “Empty Inkwell” on the death of a loved one. Karen Fabiane, still reeling from the announcement of her win, read an old poem from the ‘90s about talking about the dead & living “Voice Under a Cold Moon” then “The Beerdrinkers,” a conversation in a bar. A.C. Everson finally got here, her poems about 2 very different places, “Heading South” about a trip to Prague, & “I Live Where…” about sirens, & shouting in the high-rise across the street from her apartment. 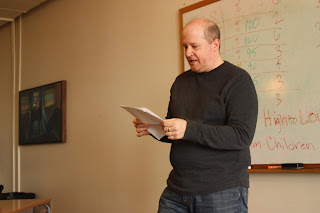 Dan Curley was here last month just to listen, but today he brought 2 poems to read, the first about going to the aquarium with his daughter “Against Sentiment” & one about his seat-mate on a flight “The Art Historian’s Revenge.” Pam Clements began with a Christmas memoir of her grandmother “Gingerbread” then taking a page from Medieval literature a “Charm Against Nothing.” Ann Rokeach’s poems were based on word exercises from the 2nd Tuesday Open Mic at the Colonie Library, “In Passing” (on the contents of her dresser drawers) & a piece about immigrants “They Come.”

My co-host, Nancy Klepsch, read 2 poems about her character/persona, the first titled “When Rubylith Changed her Name to Lith,” then the second about Lith as a teacher. Joe Krausman’s poems were characteristically wry, “The Man Who Invented the Comma” (& throwing in the parenthesis, equal sign & the period), & “Spring Cleaning.” Sally Rhoades read an extended prose story/essay “Dancing with the Redwoods” interweaving an account of a dying cousin with her own visit to a dancer/healer.

List of Awards and Finalists --- 2016 Stephen A DiBiase Poetry Contest

This contest had 303 entrants from 37 states and DC and from 9 other nations. There were 27 finalists which were ranked by the judges as follows:

Other Finalists:
• I loved you long before I even met you---Kirsten Textor of Lyngby, Denmark
• To a Child at Enlightenment---J.C. Elkin of Annapolis MD
• Winter Walk---Francis DiClemente of Syracuse NY
• Let Me View Life-The Way the Heart Feels…---Jennifer Circosta of Campbell Hall NY
• “all told”---Joel Best of Niskayuna NY
• Inside the Picture Frame-For Aiyana Stanley-Jones---Keli Osborn of Eugene OR
• Missing you---Carol Kloskowski of Christmas MI
• Sad Nymph---Betsy Butcher of Iowa City IA
• Richard Nixon Must Die (for all the victims of the War)---Dan Wilcox of Albany NY
• Salt Is The Spice Of Life---Philip Good of East Nassau NY
• modie badanov---Canon Pau of Los Angeles CA
• On a Night With a Poet---Sally Rhoades of Albany NY
• Meaning of Man---Erin Gillett of Los Angeles CA
Posted by DWx at 3:42 PM