Our MC/host/dominatrix was Albany Poets Vice-President Mary Panza, but the host for the open mic was K.P. (Kevin Peterson). He set the tone by reading one of his own poems, this one about a tree growing outside his window at work.

Tonight was the annual “Dead Poets Slam” in which the Slam participants, contrary to usual Slam rules, must read a poem by a dead poet. The rule didn’t apply to the open mic poets but a number of them did read poems by dead poets, beginning with Amani doing Maya Angelou’s iconic “I Know Why the Caged Bird Sings.” Jeff did his own poem, also about a bird, this one in Thailand. Tom read an untitled rhymed piece on love. L-Majesty’s poem “Unfamiliar” was written today. 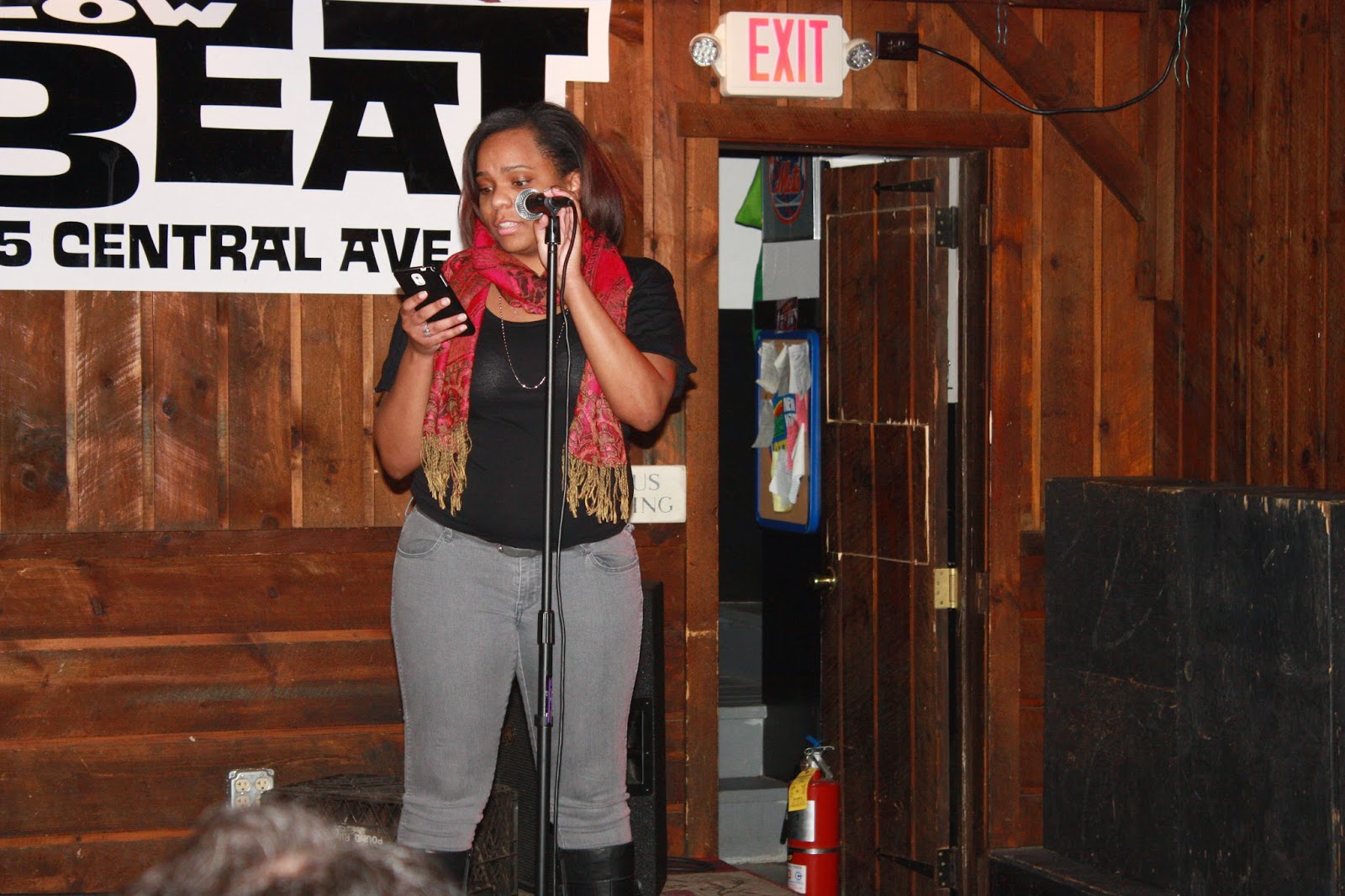 Quira returned to Maya Angelou with “Phenomenal Woman” (the only dead poet to be read more than once tonight). Nessec read a poem written by her father about her turning “21.” The poet signed up tonight as “Bucket” has read/performed at Caffe Lena as “Jesse Muse” & did a free-style piece he called “Who’s Next?” on death.

There was a huge sign up list (13) for the Slam &, since this was a dead poet slam, one could rightfully be nervous that one might hear one’s own poem read — fortunately, that didn’t happen. But it was an eclectic mix of dead poets, with a couple of disqualifying live poets & even a hoax, or 2, (undetected). Poor Stephen struggled through a reading of a Philip Larkin poem & bottomed out at 9.5 points. Pat Irish eased the score up a bit with Edna St. Vincent Millay’s quatrain on burning a candle. Jimmy scored a 0 for reading his own poem. From there on it was Robert Frost read by Jeff, Bukowski read by K.P. (of course), I read Allen Ginsberg’s “In a Supermarket in California,” Shel Silverstein was read by Ringo (losing points for a time penalty), L-Majesty read a poem by Essex Hemphill (1957 - 1995), Ainsley (a Slam virgin) read Sylvia Plath, Samson Dikeman did Etheridge Knight, Josh an excerpt from Carl Sandburg’s “The People Yes,” & Shannon was disqualified for combining Shakespeare & Eminen. “Bucket” pulled one over on the judges with a piece he said was by “Pat Muse,” but I doubt it.

The much pared down 2nd round found Josh reading Frank O’Hara, Samson doing Gil-Scott Heron’s “The Revolution Will Not be Televised,” Ainsley reading Anne Sexton & K.P. with a song lyric (“Blood of Angels”) he said was by a dead singer, but, again I doubt it, but judges being judges it landed him uncontested in 3rd place.

The final round was a squeaker with Samson & a Lenny Bruce piece edging out Ainsley’s reading of Pablo Neruda’s Sonnet #17. Hey, at least there were some real poems tonight (amidst a couple of fakes).