This series, curated by poets James Belflower & Matthew Klane, is held at the Albany Center Gallery, 39 Columbia St., Albany, NY & they characteristically mix the reading of poetry with other art forms. Tonight’s readers Michael Ruby & Marthe Reed was joined by dancer (& poet) Sally Rhoades. In addition the gallery was filled with the sculpture of Mary Pat Wagner adding a further aesthetic dimension to the evening’s performance.

James Belflower introduced Michael Ruby first & he read from his American Songbook (Ugly Duckling Press, 2013). Although he has nicely melodic reading voice, he barely moved except to turn the pages & look up. The poems used the words & phrases from pop songs that he then fills in with his words. It worked best with songs that I knew, like the Door’s “People Are Strange,” & where I was not familiar with the song’s lyrics it was hard, on only 1 hearing, to know where the poems were going. Some of the other songs he used were “Cigarettes & Coffee,” “You Know I Know,” & “Little Girl Blues,” among others. 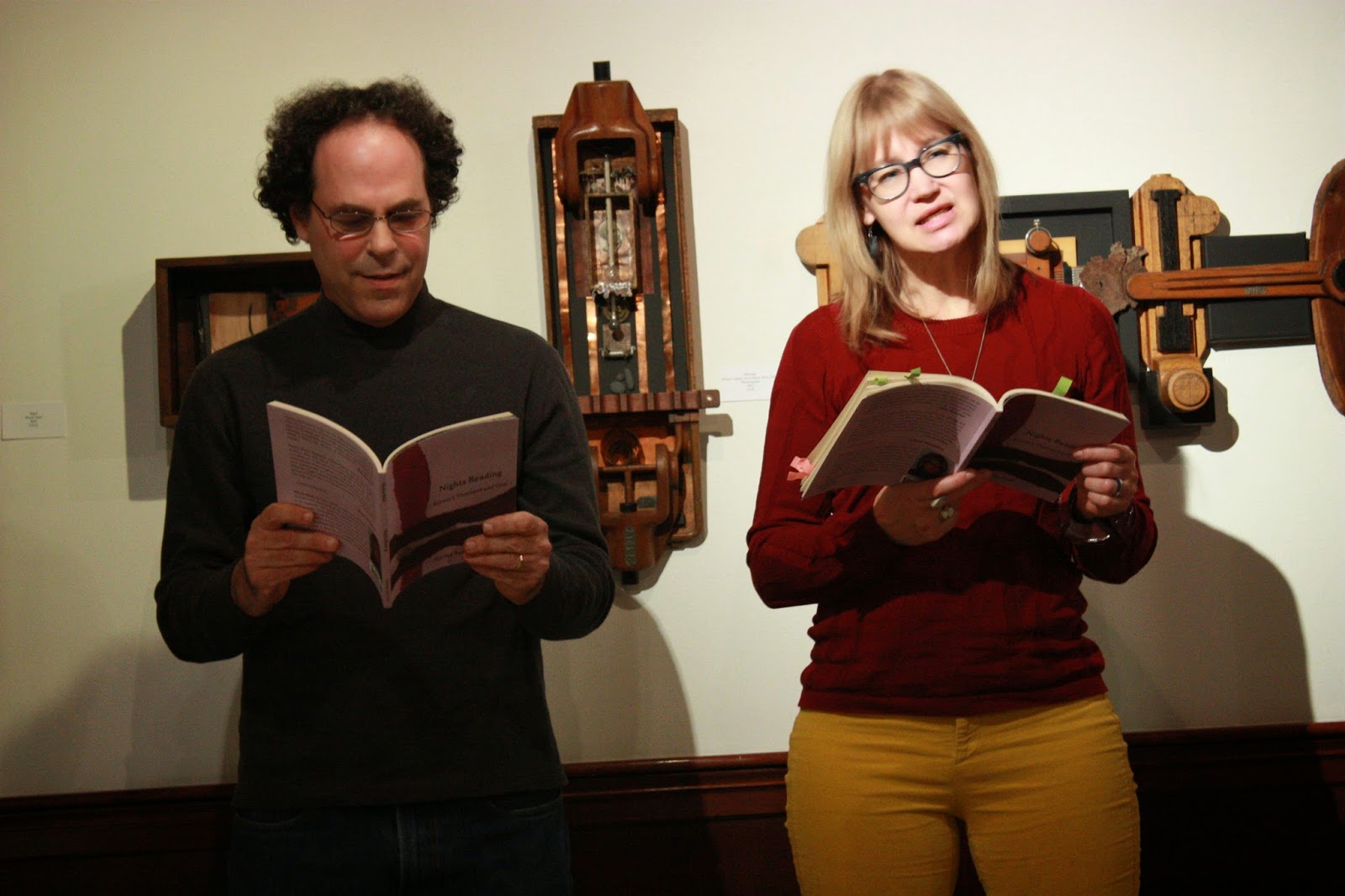 He remained in his spot as James introduced Marthe Reed, then Michael & Marthe did a collaborative reading of a piece from her new book Nights Reading Lavender Ink, 2014), the poem having something to do with a talking knot. The rest of the reading she did solo, explaining that the book is based on The 1000 & One Nights translated by Richard Burton, the poems using stories, Burton’s commentary & her own analysis, many dealing with gender issues. Again, I was left wondering how the poems were put together, though I frequently got carried along by the music of the language. The poem “The Room” contained a line that made it into my notes, “narrative dancing in its own embrace.” There were also frequent quotes from poet/translator/scholar Rosemarie Waldrop. 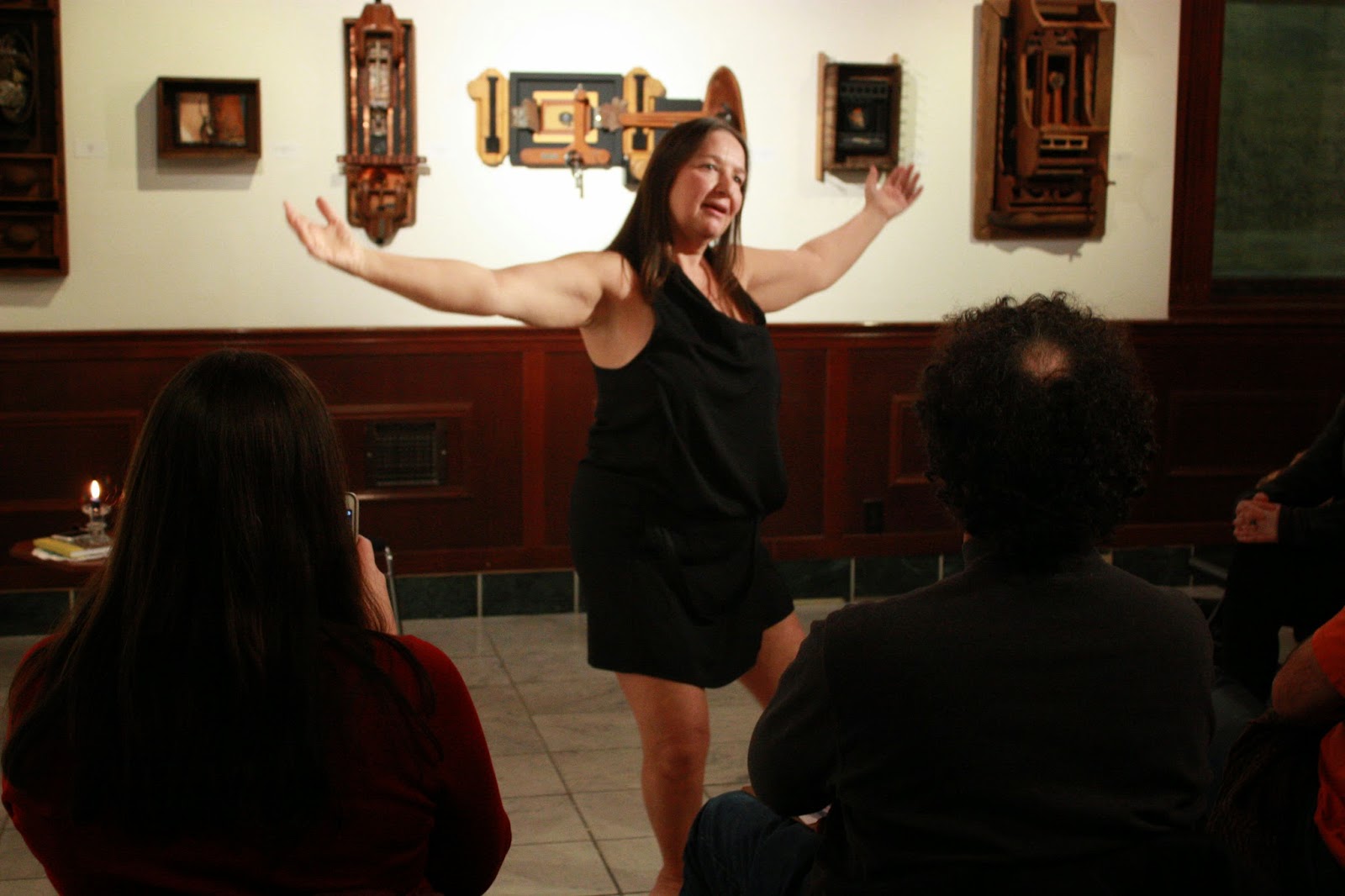 Co-host Matthew Klane read short tribute poems to Michael Ruby & Marthe Reed in his signature cut-up method, then went on to introduce Sally Rhoades. She entered the darkened room with a candle that she placed on a small table containing a notebook & iPhone, then danced as she recited a poem “My Mother was a Mohawk…” about exploring her native ancestry traced back through both her mother & father’s familes, who had suppressed these roots when she was young. Her control of her memorized words & of her expressive movement was impressive. She then sat on a chair next to the small table & read 3 poems also referencing her native roots, “I Can’t Hear You,” “The Sky is My Witness” (about her father) & “A Silence.”

Yes! Reading Series can be found on FaceBook, as can the Albany Center Gallery — a community-based and community supported non-profit art space dedicated to exhibiting skillful contemporary art of the Mohawk Hudson region.
Posted by DWx at 2:53 PM