Live from the Living Room, November 12


Back in the downstairs “living room” of the Pride Center with our host Don Levy. 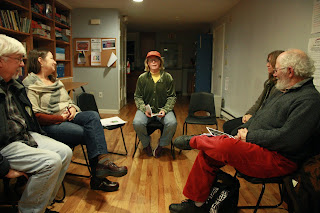 Tonight’s featured poet was Elizabeth Gordon/Elizag who began her reading with a new piece “White Privilege” done from memory. Then from her book of poems Love Cohoes (Crandall, Dostie & Douglass Books, 2014) “If Gay Marriage Had Been Legal For Me I’d Be Divorced Twice, at Least, & I’d Have A House,” then a revised, Slam version “I Do” written in response to workshop comments; we agreed that what she has is 2 poems on the same theme. Then she read a section from her earlier non-fiction memoir Walk With Us: Triplet Boys, Their Teen Parents, & Two White Women Who Tagged Along (Crandall, Dostie & Douglass Books, 2007) about being in family court. She ended with a poem spun out of this book, a commentary about being in a cross-cultural community. As always with Elizag it was a good, entertaining, engaged reading.

I was the 1st poet in the open mic, read my ever-expanding “The Communion of Saints” & a peace poem from Poeming the Prompt “Fast & Slow.” Leslie Gerber has a brand-new chapbook of poems out from Post Traumatic Press of Woodstock, NY Lies of the Poets, so new he hasn’t had the book release party yet. He read the chilling “Hot Line” then the often funny title poem “Lies of the Poets.” Bob Sharkey read an old poem “Anticipation” based on a dream about a poetry reading/party at the former Lemily Gallery on Washington Ave., then a poem from a longer piece about an encounter with a ghost of an ancestor “Cathy Gives Me a Good Scolding.”

Sally Rhoades read a “very new” piece, “On a Night with a Poet,” in which the poet in the title is herself, a long weaving of words like a stream. Jaida Samudra was here with her father, Leslie Gerber, & began with a poem from memory to Lucky, a trans-sexual friend, then on to “A Letter from Singapore” full of word play in multiple languages. Don Levy ended the night, as he does here, with a couple poems, the first titled simply “G.B.” about a boy he had a crush on in 9th grade, then another high school memoir “Climbing the Rope.”

Live from the Living Room happens each 2nd Wednesday of the month with a featured poet followed by an open mic at the Pride Center of the Capital Region, 332 Hudson Ave., Albany, NY 7:30 PM $3.00 donation.
Posted by DWx at 4:16 PM