The third & final program in this year’s series of Saturday evening readings in Washington Park under the gaze of Robert Burns. It was another beautiful Summer evening in the great Northeast. The poets were Geraldine Green from the UK, & George Wallace from Long Island & NYC. Geraldine was at the end of a 3-week tour of readings here in the US for her book of poems Salt Road (Indigo Dreams, 2013) . She lives in Ulverston, Cumbria, UK. 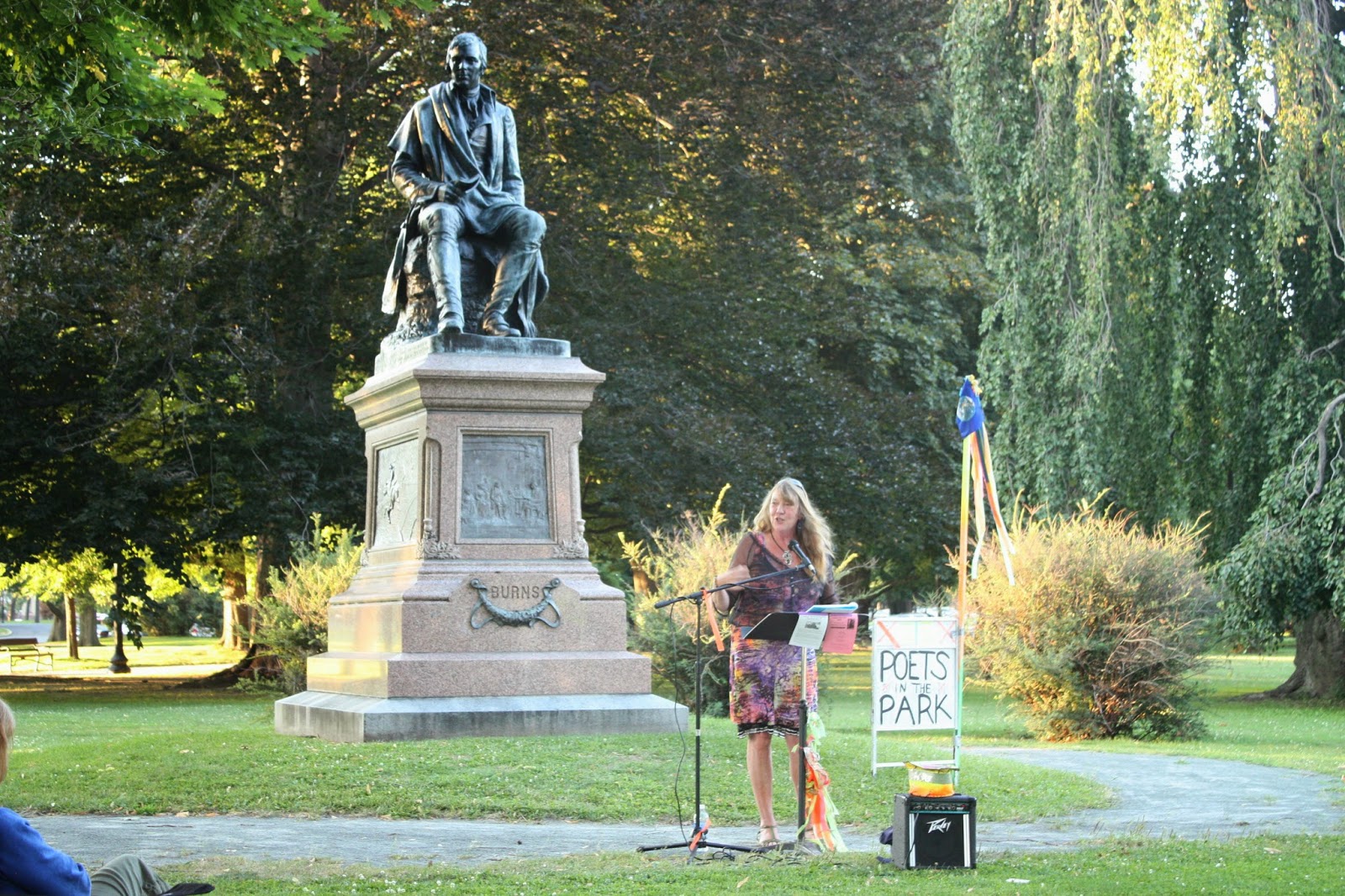 Geraldine read first, poems from Salt Road & from earlier collections. She began with “Me & Jeanine” a working-class poem about her 1st job as a trainee typist in a shipyard. Her next piece, “All Day I Sit in the Woods,” peaceful, contemplative, was based on a poem by Louise Erdrich. Next she read a couple selections from her 2009 collection, Poems of a Mole-Catcher’s Daughter (Palores Publication), the title poem originally written in the Cumbrian dialect but read in the more understandable English, & a poem “to the mad-ones” who get locked up, about her Uncle Joe making up poems walking along the lane. Appropriately enough she read a tribute poem to Walt Whitman here where we celebrate Uncle Walt’s birthday each May with a reading of “Song of Myself,” then “Hanging On” in the persona of a battered woman. A couple poems about the sea: the title poem from Salt Road (all sold out before she got here) about finding a sunflower as she was walking out into the bay, & a memory poem about swimming amongst mackeral in the Irish Sea. She ended with a portrait & tribute to the city “Liverpool” where her husband Geof is from. 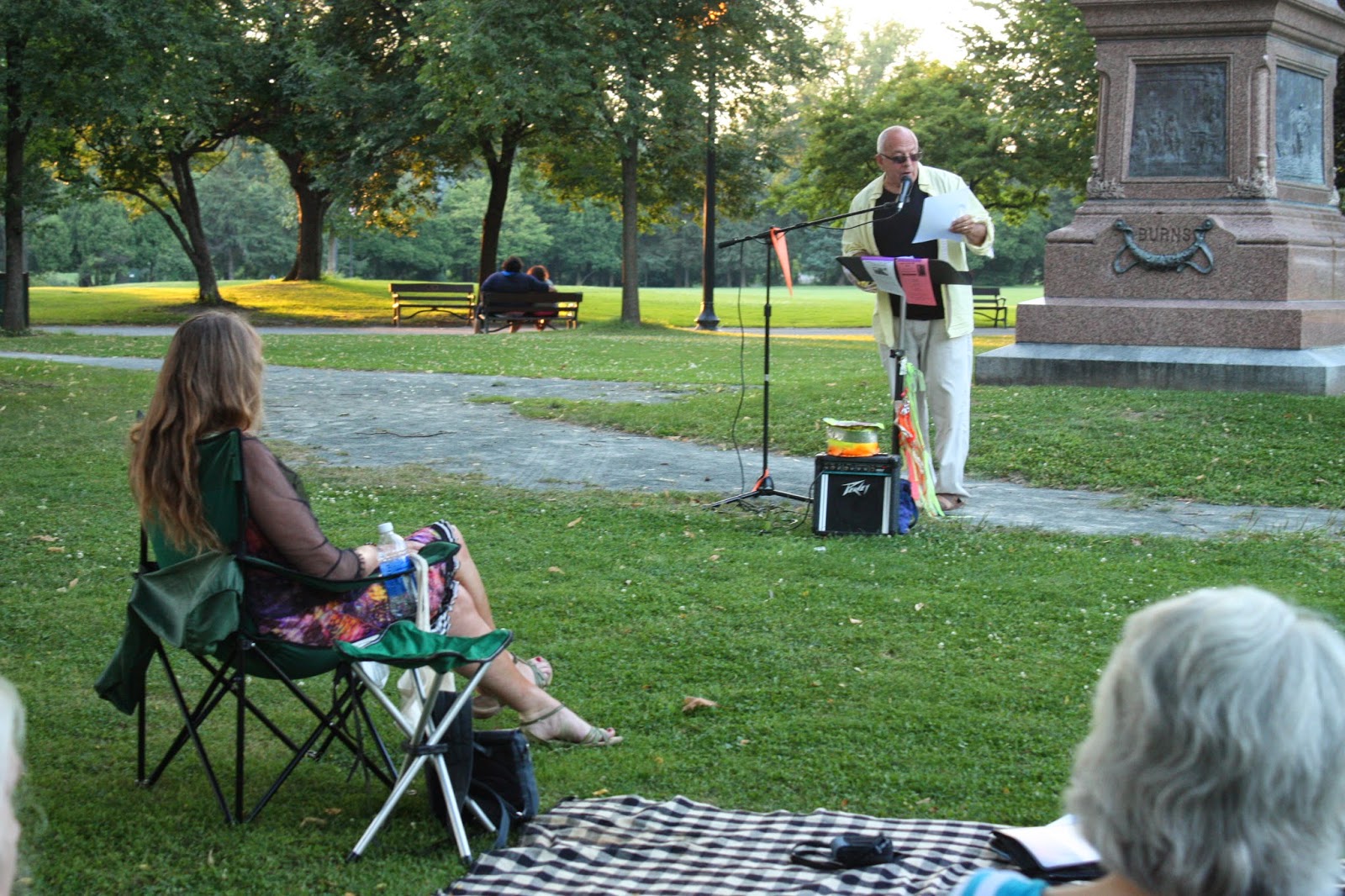 George Wallace had read in Poets in the Park back in 2009 (& gave up part of his time then to let visiting Geraldine Green read a couple poems) & George & I have been paired up a number of times at poetry venues here in New York State & in Connecticut. While Geraldine’s style is more meditative, private, George is very much an incantatory, public poet. His first poem was “The Blues” piled up images & metaphors (“… 365 hands feeling you up …”) as he does in so many of his poems. “Sometimes You’ve Got to Knock a Man Out to Wake Him Up” was dedicated to Woodstock poet Andy Clausen, then the ultra-American “Belt Buckles & Bibles” based on travels through Kansas & Oklahoma, & the true narrative, “Riding with Boom-Boom” (New York bluesman Larry Ports attacked by the cops in October, 2013). Another poem about an encounter with NY cops he dedicated to me, about an encounter with Zuccoti Park. “I Want to Go Where the Garbagemen Go” is a poem I’ve heard George read previously, & can listen to again, anywhere. He ended with the high-speed “This Redhead of My Sudden Acquaintance” (“after Neal Cassady”) from his 2009 collection of "new American poems" Poppin’ Johnny (Three Rooms Press).

& so we bid farewell to the 2014 edition of Poets in the Park & hope that when we find ourselves here again next year (deo volente) that the weather will be just as fine as it was this year, & the poetry too!

May the Muse be with You.

truongmuunghenhan said...
This comment has been removed by a blog administrator.
May 6, 2020 at 3:12 AM