This was a noon-time reading held in the Massry Center Gallery at the College of St. Rose in Albany by the students in the first class of the new MFA in writing program, an advanced poetry workshop. The reading was of poems written around/inspired by the current exhibit, "Ellen Driscoll Core Sample." The works on display were mostly drawings, paintings, some very large, others rendered as a series of folding pages for the single installation piece, an upside down landscape of oil rigs made of plastic bottles. The class' professor, Barbara Ungar, first introduced the gallery's director, Jeanne Flanagan, who welcomed us & spoke briefly about the work on display. 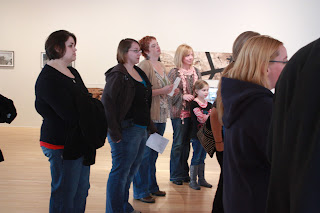 Professor Ungar served as M/C & read at the end. The first student to read was Matt Allegretti, with 2 poems, "The Drowning World" full of oozing oil & man-made disasters, then sex among the ruins in "Take Shelter." Jill Crammond, a frequenter of the open mics, read "The Mother Mistakes Her Son For an Empty Soda Bottle" & "The Artist Needs Titles, Refuses to Name Her Work" in which the poet compares that to not naming your children (Jill never has a problem with titles). Sadie Hickman read a poem about another disaster, the on-going fire in an abandoned coal mine in the (now-abandoned) town of Centralia, Pennsylvania. Barbara Ungar read the poem "In an Art Gallery" by Carol H. Jewell (some of these students have day jobs they can't leave during the day).


Jacqueline Kirkpatrick, who has distinguished herself recently at the Slam at Valentines, read a poem based on a line in a poem by Al Gore (!), "An Inconvenient Shepherd." Sarah Sherman had a different, more personal response to the upside down installation, the poem "Upside Down Thanksgiving," thinking of her grandmother watching over the holiday preparations. Another Albany open mic poet, Carolee Sherwood, read a poem about the Gulf oil spill, "Spill," that included not only oil-drenched birds but lust & desire as well. Barbara Ungar read a couple of her own environmental poems, "Lament" on global warming, & an abcderian poem on animals on the endangered species list, a found poem, "Things Do Not Look As Dismal As They Did."

Good work by all, even the Professor. Check out my Flickr! site for photos of the individual students.
Posted by DWx at 6:54 PM