My co-host Nancy Klepsch could not be here today so I had to wing it alone, but it was easy. While some of the open mic readers were here early, others came in later, adding to the bottom of the list.  I began with an old poem for the day (Veterans Day), "Peace Marchers at the Viet Nam Memorial." 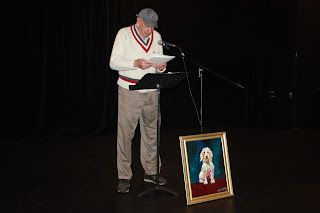 First timer Bruce Ottmer read a string of rhyming poems, to his late wife Clare, who was a painter, & to his cat, even one for a dog, complete with a painting by his wife; he got carried away & didn't have time for the poem he wanted to end with ("Ode to an Artist") but had copies for us all. Kathy Smith was more careful about her time & began with "In the Distance," again a dog -- I was beginning to worry if this would be a theme today -- but she went on to a recent poem "Midnight After the Hurricane in the Garden Near the Airport." David Wolcott read from his prose memoir, an excerpt from a chapter titled "The Wooden Shoe," about a commune he lived in in Vermont around 1972.

Bob Sharkey read an ekphrastic/museum piece, "Offering Bearer," from his new chapbook Surface at Sunrise (Benevolent Bird Press, 2012), then a prose piece, "The End," from a series about the fictional bar The Iron Ear. Joe Krausman read "The Answering Machine," funny & metaphysical, then the crazy poem "My Son the Meshuggahna." Sean Heather McCraw's first poem, "Tomasina," was about the seasonal appearance of a turkey in the neighbor's garden, then a remembrance of being 17 & waiting for the surf to take her away, "Nightwaves, a Memory." Ron Drummond began with 2 sentences on crows in his yard, then a long piece celebrating Obama's election victory in 2008.