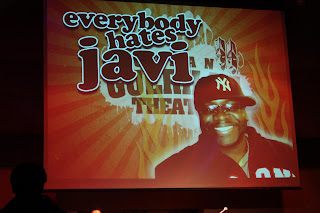 After the Yes! Reading I raced (not quite) up Central Ave. to WAMC’s Linda Auditorium for the monthly gathering of UGT. I thought I’d be late, but Mojavi had just taken the stage & was talking about getting smacked as a kid by his mother in the supermarket. He must’ve been soooo cute! Mojavi was very spiffy in a tan suit & a bowtie -- this was the night to roast him, so the host was DJ 250.

Blue Storm was back in town from Brooklyn & performed the just written poem about how she “…loves to screw…” oh yeah. 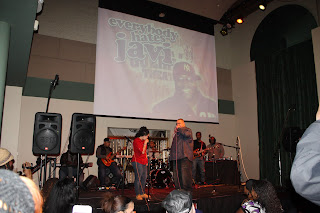 Then Kat the Poet with a sexy piece called “Technology.” Next up with a song was Alicia, who can be heard as back-up on Poetyc Visionz' new CD. I followed in a role I often make fun of when others do it, as a stand-up comedian (or a close facsimile thereof), with some personal observations about Mojavi & his role in the community, the point being, “he keeps it real.”

I only had a little time left before I had to leave, but had to stay to hear Poetyc Visionz perform with Alicia “Dreams are Unrealistic” from his brand new CD “Life” The Meaning Vol. 1., & of course grabbed a copy before I left. The last performer I caught as my exit music was the singer C.J., but there were more later.

Check out Urban Guerilla Theater on the third Friday of the month, music, poetry, performances, even some food & drinks, at the Linda Auditorium, 9PM.
Posted by DWx at 9:05 PM