Tonight’s featured poet, Anthony Bernini, brought his cheering section & his new book, Immediate Worlds, to the Social Justice Center. But first some of the open mic & a good crew it was tonight.

Bob Sharkey was first up with his poem “Marshals,” a look back to political demonstration in the 1960’s. W.D. Clarke’s “Gideon’s Eye” is another ballad about a prosthetic device in what may be a continuing series. 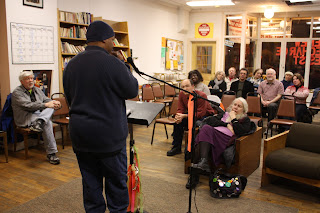 D. Alexander Holiday by-passed his own poems to read one by Roger McGough. Elizabeth Haight squeezed in 2 poems, “Love Arrived,” & the second on reading Anthony’s first book of poems, Distant Kinship. Slam champ Elizag performed her slam-winning poem “I Am Troy Davis,” & showed it could work in this smaller, quieter setting. 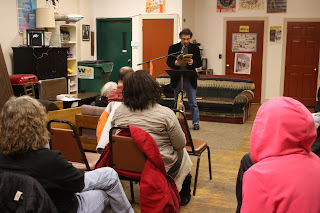 Anthony Bernini read mostly from Immediate Worlds (The Troy Book Makers, 2011) & dedicated his reading to Mohammed Ali, describing him as “one of the great men of the Earth.” He began with the poem “Meterological Spring,” then, staying with the theme, of death “Visiting the Dead” (in Malone, NY) & “The Disposition.” Then on to “love,” beginning with “Because Her Any Place Can Touch,” then to a interlude with some love poems by Rumi, & back to his own with “Love Light.” “At Honorable Bryant’s House” was about the meeting of 2 old friends, down in South Carolina. “The Rain that Farmers Love” was a musical examination of what we need, while “The Warmth” acknowledged farmers & dancers. He closed with a poem about San Francisco from Distant Kinships, “Top of the Wheel.”  Anthony's poems can be challenging hearing them in a reading, but that's the reason to buy his books.
After the break I re-started the open mic with an old piece (for my birthday month) “This Birthday is Not Divisible by 10.” Avery read from a Kerouacian pocket-notebook about the view from the 22nd floor of the hotel he was in recently in Hawaii. Sylvia Barnard read her poem “Rapp Rd. Community” about an early black community on the outskirts of Albany. Then Moses Kash III, who had taken a cab to get here, finished off the night with a recent piece “Egyptian Turmoil” focused on political events here & abroad.
Each Third Thursday we gather here at the Social Justice Center on Central Ave. in Albany (NY), about 7:30 for an open mic & a featured reader. Your generous contributions support the work of the Poetry Motel Foundation by paying the featured poets, & the wide-ranging work of the Social Justice Center.