The Return of Amiri Baraka, February 21 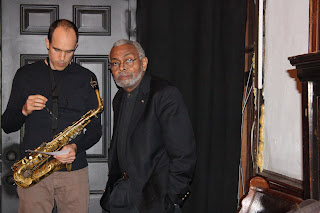 confrontations with racism & America's dominant culture but never got to see him perform live until February 1993 at RPI. Then, like the bad black penny he is, he came back to Troy again, to the wonderful, holy confrontational Sanctuary for Independent Media last week.
The place was packed & they had to bring in extensions & additions & do other magical things to get everyone in legally so the City of Troy wouldn't try to close them down again. Amiri Baraka did his poetry/rant performance/reading with alto saxophonist Rob Brown blowing solo bebop riffs -- Monk, the Diz, Coltrane, even a bit of the Prez, et al.

It was politics & poetry, poetry & politics -- "In Town" (with Monk's Mood); a series of "Lowku" (like haiku, but not bothering to count); a rant in response to his being fired as New Jersey's Poet Laureate, "Fashion This from the Ivory of the World," with its images of rats & vampires; the funny/caustic "Jungle Jim Flunks His Screen Test," on the evolution of the white colonialism of Tarzan to Jungle Jim; then the poem that got him fired as New Jersey's Poet Laureate (what were those folks thinking in the first place?), "Somebody Blew Up America," with its great questioning "Who...?" of the power structure behind America's assassinations, scandals, wars & disasters, with Rob Brown's rendition of Monk's "Mysterioso" as the obligato/commentary/footnotes.

He said he wrote 2 poems for Barak Ob 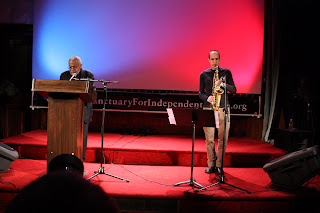 ama but couldn't find them, so read "Whys" (or is it Wise?), with it's repeated "Africa..." & the line "at the bottom of the Atlantic Ocean there is a railroad made of human bones, black ivory, black ivory, black ivory..." But then he found & read the Obama poem he wrote after the election, that ends with Lester Young.

During the questions, he talked about his use of imagery from John of Patmos of the Book of Revelation, & how, as a child his mother made him memorize Abraham Lincoln's Gettysburg Address, how those words formed his consciousness & how wonderful it is that we are talking about Lincoln again.

How timely Amiri Baraka is, whenever he shows up, how wonderful to have him around still to come back here & challenge & threaten us, & how absolutely stupendous it is to have the Sanctuary for Independent Media amongst us -- go there, support it, they need it & so do we.
Posted by DWx at 10:19 PM