Poetry at the UAG, February 13 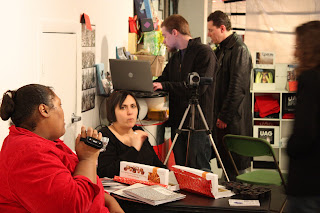 Valentine's Day Eve open mic for lovers & others, with host, Mary Panza, vice-president (with the emphasis on vice) of AlbanyPoets.com. Lots of citizens, virgins & other folks we hadn't seen before, in addition to the usual crew.

Matt De Joseph began with 2 rhyming, sad-love poems, "No Picture" (missing her but...) & "Drifting" without his girl. Matt Galletta also had a "not-love poem" about seeing pictures of an ex, "This Will Happen to You." Another not-love, regret poem from Dan Stalter from his chapbook.

Harvie Havel has been lurking around open mics lately & finally read tonight, a short prose piece he described as his "first date in Albany," an incident at a bus stop after an open mic at the Social Justice Center. Another new reader, Sean Gallagher said he has been writing a haiku a day for almost a year & read 10 frequently outrageous haikus "for a pathetic love life." I repeated my poem "I Want to Read My Love Poems to You..." &, on the flip side, the short "Love & Hate."

R.M. Engelhardt followed with "The Light" & one to a Mistress L., "Sacred." Dominick Rizzo read a love poem to his wife, "Next to Her," & litany or chant poem, "Never Fear." The night's surprise virgin was Brigid Schmidt who gave a wonderfully relaxed & competent reading for a first-timer, what she called "3 faces of love:" "Longing & Grace," followed by a poem about the sad end of a romantic meeting in NYC, then one about getting out of a marriage, "The Widow's Garments."

el presidente Thom Francis brought it home with a poem by Spencer Reece, "To You" from his book The Clerk's Tale. Then a few of us went on to Elda's for drinks, chatter & gossip & then home to wait for the Easter Bunny -- no, wait, wrong holiday.

[This series is running approximately every-other Friday up to WordFest in April, with 2 featured poets each night, but no open mic. At the UAG Gallery, Lark St., Albany, NY, 7PM.]
Posted by DWx at 2:38 PM