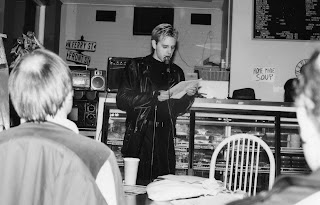 [An old shot of Jason Dalaba, the featured poet, from November 2001 at the defunct Arthur's Market in Schenectady.]

Tonight at the NightSky Cafe, 402 Union St., Schenectady. Our host with the adjustable mic stand, Shaun Baxter, started us off with Ogden Nash's answer to the Mr. Boston's Bartender's Guide, "A Drink With Something in It."

The first poet on the list was a new voice, but one who normally plays in a band, Eric Ochshorn & he recited a couple of his song lyrics, "Living Life is Half a Dream," & the rap-attack, deconstructionist (& very funny) "Refuse & Resist," a critique & criticism of rap terms.

Tim Lake is a performer who has been around for a while, even has hosted a venue or two, but I haven't seen him out in a while. He read a couple new pieces, "Last Moment Overture," on Autumn's end, & "The Yule Ring." Just be careful or he'll turn you into a toad.

Barry Finley's pieces were new to me, an intensely literary-referrent "We v. The Woolf" (as in Virginia Woolf), & "Rowing Song," which to me said it is important to just keep on going.

Alan Catlin called his poem "The Chud" an ode to the NYC Subway system & the title refers to the homeless or otherwise marginal folks who live down there hidden among the tracks; he also read a poem from the vast repertoire of works inspired by his years as a bartender -- many are out there in chapbooks & various zines, worth the hunt.

I've talked about tonight's featured poet, Jason Dalaba (or J. Dalaba as he preferred tonight) & his chapbook from Dead Man's Press, Yesterday's Machine, in past Blogs on this site. But I've grown to appreciate the entertainment value of his Goth-styled performances. Tonight he experimented with background music/sound effects in his first piece about an invasion of Zombies, then later with "Sex & Math" from his chapbook. The rest of his poems were also from the chapbook, & either I've become familiar with his work or his readings have gotten better, more planned & relaxed -- his best yet.

After the break Matt Galletta (or was that "Matt Galapagos-Islands"?) read about a group of students acting up with the elk at the New York State Museum -- stay tuned for GallettaFest next month when Matt is featured at "Live at the Living Room," then the following week at "Zounds!"

W.D. Clarke has been mining the true stories of veterans for his rhymed narratives & tonight's humorous pieces both had to do with G.I.'s dicks -- "The Christian & the Vixen" (about how it's sometimes better not to get laid), and "The Circumcision" (that's all you need to know).

This was the first chance I had to take a picture of Sue Cerniglia on stage reading a poem. Sue attends a lot of poetry open mics, but has never been on stage to read. Tonight she read 2 poems from a new book by her friend Phil Sweeney; she says she'll be back with a poem of her own someday.

Another long-absent poet who we've missed on the scene, Shannon Shoemaker, showed up tonight & did 2 poems "off the top of her head," "Out of the Shadows," & the relationship poem, "Grown Cold."

Our host, Shaun Baxter read a new piece, the absurdist metaphoric slasher movie "Global Warming;" it was funny & right on the money.

Always the 3rd Wednesday of the month, & Shaun has carved out a unique niche in the poetry scene here. Worth the trip, even from Schenectady.
Posted by DWx at 9:02 PM

Good job Sean, sounds like a great night. Thanks Dan for giving us so many blogs in 2007. See everyone in January.