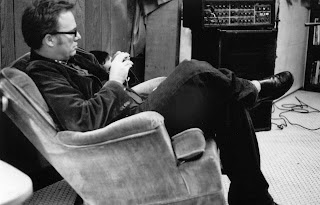 
The last third Thursday of 2007 & tonight's muse was Enid Dame, her marvelous "Holiday Poem" choked me up, even with practice. Thanks, Enid! Sanity Claus was there all night & provided poetry books & zines to the poets, with the obligatory confession of the year's sins (summarized into "naughty" or "nice") on Sanity's lap. I think I had the most fun, but some of the lap-sitters seemed to enjoy squirming.

Joan McNerney was back again with a multi-part visuals "Hudson River Memories" -- & she sold a book! Alan Catlin was sensitive to the plight of holiday travelers & read "The Airline Passenger from Hell."

And the holidays mean visits from family members, like Mimi Moriarty's "My Son, California." Don Levy took us back to a time long past in "Whatever Happened to Mary Jane." And Barry Finley amused us with 3 parts about Guinness -- & made some of us thirsty.

The featured poet was the not-so-professorial assistant professor at the College of St. Rose, Daniel Nester, who is also responsible for the Frequency North reading series at St. Rose (www.strose.edu/Visitors/frequencynorth/frequencynorth.asp) and co-curates (with Erik Sweet) the "Behind the Egg" series at Point 5 on Madison Ave. His reading was a relaxed stroll down (his) memory lane with explorations of pop culture, the source of much of his inspiration, & lots of acting out & banter with the audience. After reading his first poem (about his first kiss, growing up in South Jersey), Daniel said he wanted to do this "jerky professor thing" & in his nasally "professor voice" asked us to not clap after every poem, which we all promptly ignored. His pop music culture poems included "The Drummer in our Band Tells Us He is a Virgin," and "Found Poem" from a Kiss tribute band. Movie-inspired poems were "Dramaturgical Aside" & "Poem for the Evil Twin Episode of Night Rider" (you had to be there). There was also "Maternal Impressions" from his days as a reader for Painted Bride Quarterly that managed to work in both Blake & Bukowski into the same poem; and excerpts from his hysterical "Queries," culled from his comments on student writing assignments. He ended with his final poem, as we all do, with a poet, a restauranteur & a mob guy in "Mott St. Pastoral." It was a lot of fun & seemed gone in a flash.

After the break, I invoked the Master's Right & read my new poem about Georgia O'Keefe's hands & in true Zen fashion sat on my own lap. Therese L. Broderick (she actually signed up with the middle initial), the lightest lap-sitter, read a wonderful Mommy poem, "I Love You," about over-hearing her daughter talking to a boyfriend -- love like water.

W.D. Clarke again proved the value of rhyme in a "strictly for fun" narrative poem, "The Pirate's Wife." Maeve Smith who had not planned to read pulled down a Henry Vaughn poem from the shelf, & said she may return with poems of her own.

Moses Kash III, before crushing me again this year, talked about his black heroes, his books & the letters he has written in "So We Ask Ourselves." While Sylvia Barnard was pouring over books in the Cambridge University Library, outside there were "Ducklings."

Tom, who has shown up lurking quietly at other open mics, did a dark rap from memory -- still no last name. And Matt Galletta gave us a taste of what is in store during GallettaFest (formerly known as January) with a poem about killing a fly with a bible while having sex & suffering the consequences. As we all know, God is watching -- & so is Santa Claus.

Every Third Thursday, at the Social Justice Center, 33 Central Ave., Albany -- we'll be back next year.
Posted by DWx at 11:49 AM

I had a great time and thanks for everyone who came. The open reading was fun to listen to. I might "force" my students to come next time. Just kidding.