Behind the Egg at Point 5, October 6 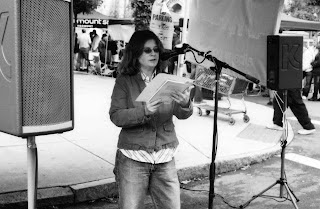 Not quite literally behind the Egg, this series began it's new season with 3 powerful poets from the area, Randall Horton, Cara Benson & Carol Graser. The hosts are Erik Sweet & Daniel Nester (getting a lot of space here on the Blog in the last couple days).

I arrived a little late (coming from the Banned Books reading, q.v.), just as Randall Horton was coming up to read. He did a 3-part reading that really over-lapped itself. The first part of his prison poems & poems touched by his prison experience; then from a cycle of poems about "the African myth," the poems playing on images of sound, including do-wop, a harmonica man, even the sound of dice in a game of craps; the third section from his book, The Definition of Place, persona poems about his family, often in southern black dialect. Check out his website, www.randallhorton.com.

When I came in I ended up sitting next to Cara Benson & it seems she brought her own cheering section from a recent poetry workshop -- hey, if your friends & relatives don't come to your readings, who will? I wasn't quite sure what she was doing in most of her poems, but her performance & stage presence was engaging, if somewhat giggly at times. She does the performance thing well, without over-acting. One long piece, read from a home-made booklet, was like riffing, or improvising over chord or key changes as she brought in references to the thunder & rain actually occurring outside, with lists of words, each section strung together with the slowed-down phrase, "then the breath..." Her last piece, "6 Billion & 3" was on dating, in the voice of a nasally persona.

Carol Graser is the host of the open mic at Caffe Lena (I haven't figured out them HTML accents yet), & was featured recently at Lark Fest, out promoting her wonderful book, The Wild Twist of their Stems. She read a few from the book, like "3 a.m." & "Sestina for Peace," & excerpts from "Dear One." And a wonderful potpourri of others: "Behind the Egg" about an earlier reading here, a poem from Carolyn Forche's workshop, some political pieces, a new "Journal Entry Poem" on writer's block, her N+7 on the Lord's Prayer, others. Carol's hosting the Caffe Lena readings & her more frequent appearances have paid off, making her much more self-confident, joking, at ease with the audience. My impression is that in the past she was intimidated by other poets in the room, but she now knows she's at least as good as, if not better, than the rest, even the some more "famous" poets she reads among.

This is an eclectic series with an erratic schedule so check out www.unpleasanteventschedule.com/behindtheegg/ or the host venue's website www.federationofideas.org for more information.
Posted by DWx at 12:48 PM