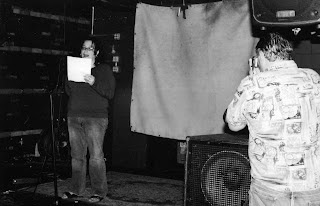 [This is a generic Valentines reading shot, with Dain Brammage taking a picture of the poet, in this case NicoleK. This was from last month's open mic.]


One often wonders whether this open mic really happens or just exists in the fantasy of alcohol & memory. Once some years ago I read a poem here & a lady I had invited told me later that's when she fell in love with me. On some nights the-nameless-we just sat around & told outrageous stories & bought each other beers. On the Road is filled with such lies & similar fabrications. "October in the railroad earth..."

Our host is Thom Francis. Of course, el Presidente. On to the rest of the poets.

Why do people sign up #5 or #6, when everyother number is blank? I (aka Dan Wilcox) rushed in from the Voorheesville peace vigil, signed up in the blank #1 spot & then was on stage (after scattering kisses & handshakes & a $10 on the bar) before I could catch my breath. So my choice of poems (except for the last one) was a bit rushed & not "wise." But I used the October/Valentines theme: "Zombie Gourd" (published in Wired#2 (where's #3?), & "Pick Up Line;" then Tom Nattell's "Christopher Columbus Fantasy #61" (with Mary Panza's whistle to make it Tom-authentic).

#2 may have thought he would be #6, but that's the alchemy of the List. Chris Robbins drove all the way in from Massachusetts, but then we knew that as soon as he began to speak, read a tribute, "Womanist Poetry Day," then a poem to hippies, "Flower Power," of course.

After quite a hiatus from the open mics, Rich Tomasulo was back with a topical piece, "Like an Undocumented Worker." NicoleK says she is turning her kids onto e.e. cummings & did one for us, then one of her own, pondering relationships, "Not sure what I'm doing..." [do any of us?] or "...just feeling."

Thom Francis did his piece beginning, "We can tell time by the lines on his face..." this time without musical accompaniment (unless you count Keith Spencer working the sound board).

Sometimes Dain Brammage gives us more information than we truly need, like what he had before coming to Valentines, & it wasn't dinner. I'm not sure what his wife's reaction would be to the birthday poem Dain wrote for her, "I Lust," but it does end by him pledging to act "like a faithful husband."

Back on the scene after a short pause was Chris Brabham & that was good. He has a tendency for allegorical monsters & in "Hypocrisy's Concubine" the feeding monster is eventually chased away by Truth & Virtue, I think (& hope). Then he shared a litany of stuff to get one going, "Medicine Cabinet Junkie."

My Blog for September 26 has a picture of The Poet Essence & her poem "Free Jena Six," but as good as it is it is nowhere as good as seeing/hearing/experiencing her in person, as she recited that poem -- a good message to take us on into the night.

Always the first Tuesday, Valentines near the beginning of New Scotland Ave., 8PM. For the next gathering, on November 6, Mary Panza has assigned us the task of doing a dramatic reading of what we consider the "worst song." Which is easier than singing the Star Spangled Banner.
Posted by DWx at 2:11 PM

Remind me and I'll read "Mc Arthur Park". Does anyone know what that song is about???? Uncle Don

In your fantasy of memory
I was never there,
but that's the way world will be
so I don't really care.

"Short People have no reason to live"