With our host, Charlie Rossiter, this open mic thrives & continues on Zoom, perhaps an example of the yin & yang of experience, any experience, even this COVID-19 pandemic.

I am blessed (or cursed) by a tradition of being “first” on many open mic lists. Historically, this goes back to the late 1980s flowering of the poetry open mic scene in Albany (NY) when there was a reluctance by poets to be Number 1 on the sign-up sheet. I would arrive a little late (but before the reading had started), see that no one had signed up #1 & sign-up. Later I realized, as other poets have told me that they realized too, that when they read early on, then they could relax for the rest of the evening rather than perseverating about what they were going to read, how they would be received, etc., & listen attentively to the other poets. So, again tonight, I was first on this Zoom list, read a poem combining/conflating Halloween & Election Day “This is Not Trick or Treat,” then in the 2nd round a tale from an Old Songs Festival from years past, “Who Lost a Bra … “

Jim Madigan, one of the long-distance Zoomers, in the 1st round read an eco-poem about the ivory billed woodpecker, “Extinction;” later read a poem published in Verse Virtual, “The Father of Hansel & Grettel”

Kenn Ash, who lives somewhere close by, read a poem like a letter to a nagger who turned out to be … (I don’t want to be a spoiler); in the 2nd round he played his trumpet for us.

Barbara Sarvis read in only the 1st round, but it was a joy, a short picture book for children titled The Long Journey about Monarch butterflies going to their Winter home. 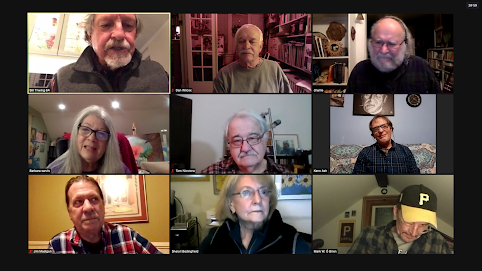 Bill Thwing read about his Uncle Billy, an eco-poem in rhyme, about teaching frogs to sing; then in the 2nd round sang & played on his guitar a 1 minute song, “Thank You,” that was put together by kids in a church group.

Our host, Charlie Rossiter, read an old poem in his 1st round about hanging out in DC, “Between Jobs One of the Good Days” then on the 2nd go-around a list poem, “Things to Know About Bear.”

I think this is the first time that Sheryll Bedingfield joined us from Connecticut, & in the 1st round she read a ghost story, “I Dreamed My Husband Returned,” in the 2nd round a letter, “Dear Mother,” remembering funny stories of her & singing together.

Tom Nicotera was also Zooming in from Connecticut, a regular here, in his 1st round read a dream poem from 2016 about getting older, “Not Enough to End the Drought,” that contains lines from a John Prine song; then in the 2nd round one titled “Thanksgiving Poem at Great Pond,” geese & honks between rival flocks then give thanks.

Poor Mark W. O’Brien had problems with his country internet connection, muted, frozen, but persevered to read “The Old Write There (for Paul Amidon)” about cutting up an old school desk for fire wood; in round 2, a strange fragment he found in his notebooks “Fragmented Childhood.”

This pleasant gathering of poets is open to poets who can Zoom in on the 2nd Tuesday of the month, at 7:00PM, from anywhere in the world. Send an email to Charlie Rossiter at charliemrossiter@gmail.com to ask for the link — tell him Dan sent you.