Well, I’m not so sure what Tim Verhaegen calls this, if anything, this somewhat random Zoom gathering, I mean, is an open mic that’s by invitation an “open mic”? Isn't more an “invitational mic?” Whatever. I’ve been privileged by being invited again now so here I was. Tim likes to do the 2 rounds thing so we each read 1 poem, then the 2nd poem described below was read in the next round.

I was up first (I like to get it out of the way so I can relax & listen), & read a bar/death poem “Dinner at the Bar,” then a piece that has been selected for an exhibit at the Arts Society of Kingston, “Writing Crows,” in which an artist will create a visual arts piece inspired by the poem.

Sally Rhoades has found that writing a poem-a-day from prompts has been useful in expanding her story of her family, read today “Rarely You Were Right” about her wedding, then another from the poem-a-day, “A Cache of Pencilled Scrawls,” reacting to an artist friend who didn’t like her casual drawings. 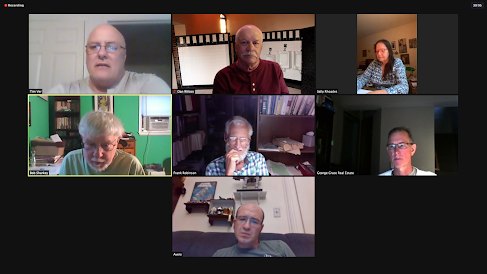 Bob Sharkey read a dream poem, “Roomie,” about a dead friend from college at a party with grandchildren & dead parents, then a Cento, one of Bob’s ongoing gifts to the world of poetry, what he described as “a quilt of other people’s work,” from the 2019 Best American Poetry, “What Happens Will Go Down in History as Fable” playing on the color blue.

Avery Stempel took a break from cultivating fungi to read a couple of very different poems, “Chit Chat" in rhyme about saying goodbye, then a poem titled “Apophenia’s Shell” using the mathematical Fibonacci sequence, which, although named after a thirteenth century Italian mathematician, actually looks back to much earlier Sanskrit poetry — I’ll let you look up “apophenia”.

Frank Robinson, who is a numismatist (you can look that up too while you're at it), read a catalog entry describing an ancient coin as a poem, then a Valentine poem, based on the great American novel Moby Dick, love as the great quest to fulfill a missing part in one’s life.

The next reader was new to this open mic & his Zoom caption identified him as “George Grace, Real estate” read first a poem titled “Writing Poetry” with images of birds, then, later, a more abstract, philosophical piece in rhyme “From Suffering to Joy.”

Our host, Tim Verhaegen, ended each round, in the first with a funny, descriptive critique of the music, dancing, the people “In My Own Way at the Gay Bar;” those of us who have heard Tim read in the past are familiar edgy stories of his late feisty mother, Tim said that he “dreams of her almost every night,” her contradictions, but still, as the poem is titled, “I Love Her.”

So as William Shakespeare wrote in another context, no matter what you call this Zoom gathering of poets & their poems it was just that: poets sharing their poems & great fun at it was.

Let me know if you are interested & I can pass your name on to Tim.

LOL thanks for the post Dan. I ask literally every poet I can think of to come to the open mics every time i have one.