Vermont is difficult to get to now, & it’s not the distance (only an hour from my house to Charlie Rossiter’s), it is much nicer to just Zoom in — I can even have that 2nd bourbon.

Our host, Charlie Rossiter, put me first on the reading list & I reprised my set from Sunday with “When Donald Trump Farts” in the first round; in the second round I lost my internet service briefly but got back in time to read “Ancestry.com.”

In both rounds Laura Ellzey read from a recent letter from her father, who had moved back to New Orleans, first a description of his first hurricane as a child 1947; then she returned with the second half of the letter describing a recent hurricane coming through.

Julie Lomoe in the first round read a piece titled “The Entrance to Purgatory,” from a poetry workshop, describing a couple during COVID; then the second time around from the same workshop, “The Domestic Rants” a series of prose poems & had to be cut off by Charlie.

Kenn Ash, as he likes to do, started off playing on his pocket trumpet as an introduction to a piece in rhyme “The Delusion of Illusion,” then in round 2 a piece on his death made humorous by the use of big words. 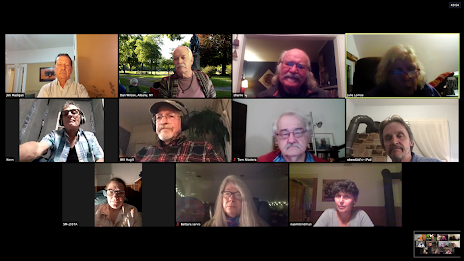 Jim Madigan dialed in from Illinois with a poem inspired by a sign he saw in Chicago “Grand Canyon Medium Rare;” then later an inspiring political piece, “Let Us Prepare” about a BLM sit-in & the street instructions from the young organizers, in “a mighty river of rebellion.”

Bill Thwing was Zooming in from Trump-land in Western PA, so he read a piece in rhyme written after the last election calling us to rise up, with Trump characterized as Darth Vader; for the second round he got out his guitar to sing a Xmas song he wrote.

Tom Nicotera from Connecticut read a poem about healing in a magic house of plants & animals “Smack Dab in the Middle of the Suburbs;” then later one about critters in his backyard “Encroachment.”

Mark O’Brien from the Capital Region read in the first round a sonnet that was like a prayer, written the day of the election, “Give Me Liberty or Give Me COVID;” his second round piece was an untitled Haibun about baseball during his childhood.

Barbara Sarvis, from right there in Vermont, read a poem written today, “My First Painting” on growing up female in the '60s & '70s using instructions from Cosmopolitan magazine about makeup & how to attract a guy; her second round piece as also recently finished & was about white privilege, “Necessary Transformation 2020,” build on abstract words.

Our host, Charlie Rossiter, read “Meditations on Frank Lloyd Wright” incorporating quotes from Wright along with his commentary on it ; in the 2nd round he was joined by Jack Rossiter-Munley on guitar for a song they planned for a service at the local U-U, with the chorus “we’re living in dark but there’s bright day dawning ahead …” — we all hope so.

Naomi Bindman had been just listening, reluctant to read, but at the end was encouraged by Charlie to join in, & I’m glad she did after hearing her in-progress poem “Collapse” with its meditative images of political unrest. That’s what happens at open mics: we try things out.

& you might try out joining this open mic on Zoom on the 2nd Tuesday of the month — email Charlie at charliemrossiter@gmail.com & ask for the link.

Thanks for the great write-up, Dan. Yes, this is a great open mic, very fun and positive.

Re: my "Domestic Rants," it's a collection of 8 rants, Beginning with "Rant at the Dishwasher" and ending with "Rant at Marie Kondo." I admit it's a tad long for a open mic, so I don't mind Charlie cutting me off.